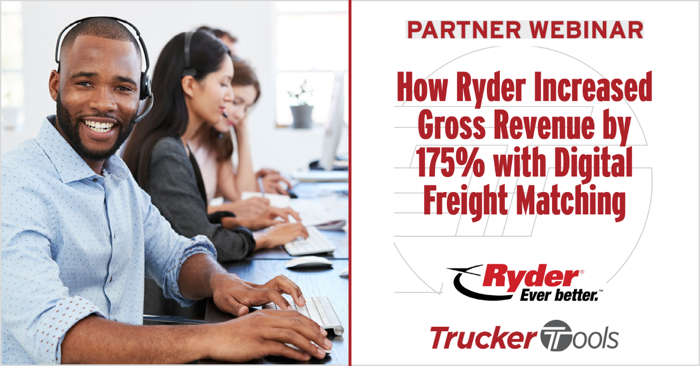 In a recent webinar with Trucker Tools, Ryder’s Senior Director of Freight Brokerage David Stone sat down with Trucker Tools’ Founder and CCO Prasad Gollapalli to talk digital freight matching technology. In the webinar, Stone shared how the company’s strategy to use digital freight matching technology has provided quick and significant returns. In the three years that Ryder’s Freight Brokerage has used Trucker Tools’ Smart Capacity platform, the company has been able to increase the size of its carrier network by 450 percent while providing deeper service to shippers and increasing gross revenue by 175 percent.

Check out these highlights from the webinar with Ryder Freight Brokerage.

“The challenges that we faced and continue to face are the same challenges that really anybody in the supply chain faces,” Stone said. “When we kicked this thing into high gear back in 2020, we wanted to get the most value from our account executives. As an account executive at Ryder, I own it all — everything from customer interaction to carrier interactions. We started to think through when an account executive is the most valuable or when they are the best at their job. We quickly realized that it’s when they’re on the phone and they’re talking with customers. With Trucker Tools, there was an opportunity to improve the backend tracking visibility piece because if our account executives are making check calls at the same rate that they’re trying to call customers, their book of business probably isn’t going to grow very big, especially when they’re being evaluated based on their ability to bring in customers.”

For Ryder, implementing Trucker Tools’ Smart Capacity platform was the beginning of increasing efficiency across its operations with the goal of passing along those efficiency gains to customers and ultimately growing its customer base. According to Stone, what attracted Ryder to Trucker Tools initially was the versatility of the Smart Capacity platform. Not only could it provide the real-time visibility the company was seeking, but Smart Capacity’s digital freight matching capabilities also could help Ryder’s account execs find and book trucks faster.

“For us, the technology piece is a plus to the human interaction,” said Stone. “We’re always going to have a human talk with either the shipper or the carrier and we love those interactions. But what you find is that certain carriers want certain levels of technology so that they can easily do their job. If you look at Book It Now® in Smart Capacity, it allows the carrier to very easily identify the load that they want and what the broker is willing to pay, which is great. What we also find is that a lot of carriers will see that Book It Now® functionality and still want the interaction with the human on the other end of the line — and that’s what we pride ourselves in. If you think of a Venn diagram associated with technology, our account executives and the carrier piece of it, we want to be able to operate in all aspects of that. We want to meet the carrier where they’re at. If they are fully integrated into the technology and they don’t want to talk to a human, we’ll give them that. If they want certain aspects of technology where they can see loads but still call us, we’ll give them that, as well. We really want to meet those carriers where they are at all times and I think this technology allows us the chance to do that.”

Stone went on to say that Trucker Tools’ Smart Capacity platform gives Ryder the chance to operate like a digital freight brokerage without losing the human interaction piece if the carrier wants that. For carriers who are tech-minded, Smart Capacity has allowed Ryder to meet them where they already are. Stone also noted that the all-in-one nature of Smart Capacity and its companion driver and carrier technology means carriers can track loads, upload documents to get paid, and find and book Ryder’s loads all with one technology.

“Then the carrier knows that they can do everything related to the load inside of this technology,” Stone explained. “The carrier or driver doesn’t have people calling them at night to find out where freight is. The driver can upload documents and send them to us. That’s the win. That’s really where you get to the carrier’s heart — when you give them the opportunity to know that they are going to accomplish everything they need to, so they ultimately can get paid and get another load with us.”

What Ryder Has Accomplished with Trucker Tools

“In the simplest terms, you grow a brokerage by adding customers and adding carriers,” Stone said. “The question of how you add those customers and those carriers is where the fun comes in. We’ve had some significant growth inside of this brokerage in the past two and a half years. Back in 2020, our carrier base was extremely small, less than 10,000 total carriers. At the time it was mostly asset-based large carriers. If you look at the glory metric that I think we posted at the beginning of the webinar showing our 175 percent growth, really the piece that you need to look at is carrier growth. We now have 45,000 carriers that we’ve added to our network and I think that’s the bigger kick. The carriers that we go after are those smaller guys, those carriers that have 10 trucks. Trucker Tools allows you to find the right carriers and helps those carriers to become sticky with you. Then Smart Capacity allows you to really grow with that carrier and they become an important part of your business — but you’re also becoming an important part of helping them run their business.”

Stone also noted that Smart Capacity’s interface is user-friendly, which is in part why Ryder has realized so much success with the platform. It’s a technology that has been easy for the company’s account executives to get used to and use in their daily work. According to Stone, the implementation was very easy and Smart Capacity has given Ryder the ability to boost its customer service levels, as well.

“If you can partner with a company like Trucker Tools, it gives you a jump in your ability to service your customers and that’s a win every single day,” said Stone.