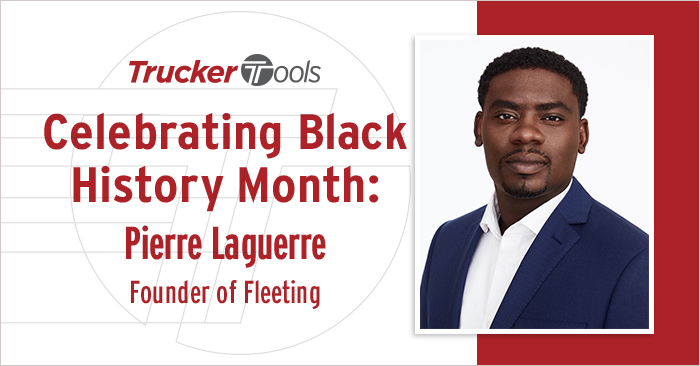 Throughout the month of February in honor of Black History Month, we’re shining a spotlight on Black freight brokers, 3PL owners, truckers and fleet owners. We recently had the opportunity to speak with Pierre Laguerre, founder and CEO of Fleeting. Laguerre was born in Haiti and came to the United States when he was 15. After emigrating to the United States, he spent his teen years living with his family in the Flatbush neighborhood of Brooklyn, N.Y. According to Laguerre, it was a tough neighborhood to grow up in where drug-dealing was prevalent.

The Beginning of a Successful Career in Trucking and Logistics

Laguerre told us that he’d always envisioned becoming a neurologist, but that he felt that dream was out of reach after his family moved to Flatbush due to the rough environment. He dropped out of college and went to work for XPO Logistics for three years and then began doing local food deliveries to restaurants, hospitals and schools.

“I’d started doing food deliveries to the same college that I had attended and I was really ashamed and embarrassed about it,” said Laguerre. “I didn’t want to be seen. Luckily, I ran into one of my former professors and he said, ‘What’s the matter? Why are you hiding?’ I told him that I’d dropped out of school and was delivering bottled water and food to the college and that I didn’t want to look like a loser. He asked me how much I was making and at that time I was making about $93,000/year. He looked at me and said, ‘Half of these kids are going to graduate and they may not see 93K, so I want you to own it. Be prideful and be the best trucker you can be. This is America. This is a place where you can really be whatever it is that you want to be.’”

The conversation with his former professor made an impact on Laguerre. A year later, he purchased his own truck, became an owner operator and began driving reefer. Laguerre said he quickly realized that trucking didn’t have an existing ecosystem that could teach new truckers about entrepreneurship and how to build a business. Eager to learn all that he could about trucking and logistics, Laguerre enrolled in a college course on supply chain logistics and eventually became a freight broker, as well.

A Life-Altering Event and the Birth of Fleeting

Laguerre went on to build a trucking staffing agency with $2.5 million in revenue in the first 18 months and also started a trucking company with three trucks, which he quickly scaled to 26 trucks. Then, says Laguerre, something happened that changed his life forever. Laguerre was seriously injured when someone tried to carjack and rob him.

“I’m still living in a dangerous community,” said Laguerre. “Someone attempted to carjack and rob me and I had my skull cracked open. At the same time, my son was in the hospital fighting through an open heart surgery. It was through that experience that I actually became a man. I can’t tell you I didn’t have the thought of retaliating against those people that did that to me, but it was then that I quickly realized, speaking from the point of view of a Black man, how easy it is for us to perpetrate that vicious cycle of violence. I felt like I had a moral duty or moral obligation to stop it with me. I didn’t want to endanger the lives of my children, have my kids grow up without a father or to hurt another Black man. Instead of retaliating, I decided to go out there and do something else. I was appalled to see that America is short 1 million truck drivers and meanwhile, communities of color are looking for opportunities but don’t know which way to turn. That’s when I made a pact with God. I said, ‘God, if you get me out of this hospital, not only will I build another company and add technology to scale and solve supply chain and logistics issues, but I’ll also create an ecosystem where I can go back to those same marginalized communities and start teaching young men and women how to get their CDLs to become truckers and eventually become entrepreneurs. I got out of the hospital and hit the ground running trying to build Fleeting.”

To date, Laguerre has raised almost $3 million from initial investors as seed money for Fleeting, including a seed round investment of $500,000 from NBA superstar Kyrie Irving. He also became the first Black man to raise more than $1 million on a crowdfunding platform. Laguerre says that he likes to refer to his company as the “Airbnb of trucking.” It’s designed to enable a gig economy within trucking for drivers without requiring them to purchase or own a big rig. At the same time, it allows private investors to purchase trucks and invest in trucking without actually driving the truck or running a trucking business.

“Fleeting allows anyone from any walk of life to own a truck,” said Laguerre. “If you’re a doctor, a teacher, a lawyer, a nurse or just somebody looking for a way to diversify your investment portfolio, Fleeting could be a good fit for you. Once the investor’s truck is registered on our platform, then we leverage technology to pair drivers with the truck and freight. We’re able to give drivers full control of their schedule and give them full control of their earnings, as opposed to being on the road for 30 or 40 days, not seeing their family and not having good food options. There are almost 4 million truckers. About 10 percent of those drivers have their own trucks, but 90 percent work for companies with zero control of their schedule, no social life and no family time. This allows us to rapidly scale a digital trucking company without having a single truck on our balance sheet because all of our trucks are owned by athletes, celebrities and other investors — people who see trucking as an alternative investment. With Fleeting, that 90 percent of drivers can operate like owner operators without actually owning.”

Laguerre went to say that as a carrier using this model, Fleeting can provide a high level of capacity, which is something brokers and shippers are always searching for. The goal for Fleeting is to reach 20,000 trucks. According to Laguerre, Fleeting’s model can increase trucking’s asset utilization significantly, as well, adding to the amount of capacity available for use. At present, trucking utilization is only about 40 percent per truck, as driver hours are capped at 70. Laguerre envisions that eventually Fleeting will allow multiple drivers to use the same truck, which will increase capacity and utilization. Investors can expect to earn on average between $9,000 and $10,000/month. Laguerre said he currently has a 500-strong list of investors who are interested in buying trucks and joining Fleeting’s platform.

“The next generation is asking for a work-life balance and culture and unfortunately trucking does not currently provide that,” said Laguerre. “I’m excited that we are the company that’s leading in the sense of providing that type of culture, and letting the drivers have the ability to pick and choose when they want to work. Drivers are always saying they’re tired of working in the industry where they started as truckers and that there’s never really any opportunity for growth for them. Here, not only do they get educated and really understand the business side, but they also can become investors themselves.”

To learn more about Pierre Laguerre and Fleeting, visit https://www.fleeting.us.

Stay tuned to the Trucker Tools blog for part two of our conversation with Pierre Laguerre.