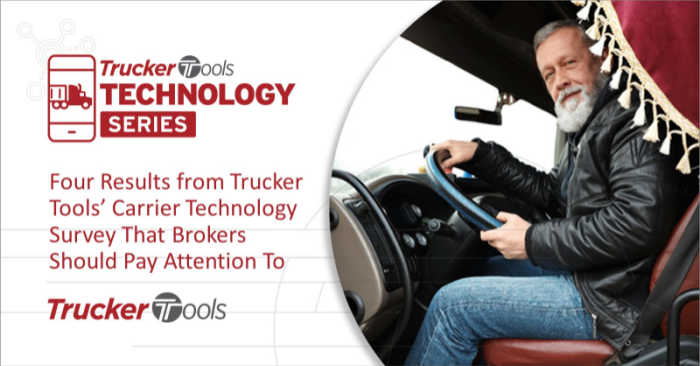 Trucker Tools recently surveyed owner operators, carriers and company drivers from across the nation about the technology they use in their day-to-day work. We asked for their thoughts on load tracking technology and about how they use technology to find loads. The survey also included questions about how technology impacts their relationships with brokers and 3PLs, and about what they look for in the mobile apps they use on the road. Of those carriers and owner operators who responded to our survey, 40 percent were carriers, 57 percent owner operators and the remaining three percent company drivers. Of the folks who answered the survey, 33 percent haul reefer loads, 36 percent pull reefer and 20 percent flatbed.

The survey results include some key takeaways for brokers. Check out these four results from Trucker Tools’ carrier technology survey that brokers should pay attention to.

All of the owner ops, carriers and company drivers who answered our survey use some kind of app-based technology when they’re on the road. The top five reasons they use mobile apps are to find fuel, truck stops, parking, weigh scales and rest areas. Survey respondents told us that they also use mobile apps for load tracking and to quickly locate restaurants, food, Walmart stores, lodging and loads. Sixty-seven percent of the those who answered our survey said that they pay a monthly subscription fee for access to tools or apps that help them find loads, and more than half pay $20 or more each month for that access.

2. Truckers and Carriers Are Suffering from App Overload

One of the questions in our survey asked, “How many apps do you have installed for finding/booking loads, for tracking and other functions while on the road?” More than half of those we surveyed have installed three or more trucking-related apps on their phones, while nearly 30 percent told us they have five or more trucking apps installed on their smart phones. In the survey, we also asked how many apps truckers and carriers have installed over the last 12 month period to meet the requirements of brokers. Those who participated in the survey told us that they’ve installed between three and 10+ apps on their phones in the last year to meet brokers’ requirements.

3. Truckers/Carriers Are Tech-Savvy, But Frustrated with How Brokers Use Load Tracking Apps

Eighty-five percent of the truckers and carriers who answered our survey report using technology in their day-to-day operations. However, we received many comments from truckers and carriers about their frustrations with brokers and some load tracking apps specifically. As one trucker told us in the comments, “Most times brokers continue to call to see where the driver is, even though they can see on the app where they are.” Others wrote, “I don’t think they pay attention to it” and “Most brokers require an app then don’t use it on their end and still call and text drivers.” Despite their frustrations, most of the truckers and carriers surveyed told us that using load tracking tech has a positive impact on their relationships with brokers — though 37 percent of those surveyed told us that they refuse to use some load tracking apps, primarily because of privacy concerns.

The Trucker Tools mobile app has been downloaded by more than 1.3 million truckers and currently is the industry’s most popular driver app. With 17+ features and tools included in the free app, truckers have all the tools they need right at their fingertips when they’re on the road. In our carrier technology survey, we asked truckers and carriers about their favorite apps in the Trucker Tools driver app. The top five favorite features in the Trucker Tools app according to our survey-takers are: Load Search, Truck Stop Guide, Rest Area Locator, Book It Now® and the Weigh Scale Finder.

Relative to the above survey results, it’s worth noting that unlike single function load tracking apps, the Trucker Tools driver app can be used many times over by carriers for load tracking, thereby reducing app overload. They can use the app to track loads with multiple brokers because the app integrates with most transportation management systems and shipper visibility software. With the Trucker Tools app, truckers also can find fuel, parking, food/restaurants, an attorney to help them with a ticket, Walmart locations and much more.

Are you interested in growing your carrier network? If so, check out How Trinity Logistics Uses Trucker Tools’ Tech To Engage and Retain Carriers. Schedule a free demo of Trucker Tools’ digital freight matching, load tracking and Book It Now®.