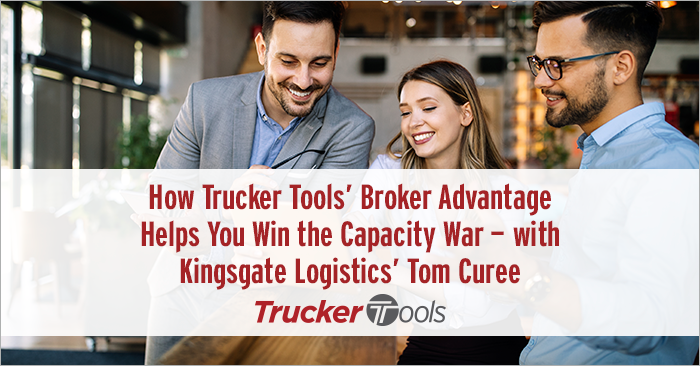 In a recent FreightWaves webinar, Trucker Tools’ Founder and CEO Prasad Gollapalli and Kingsgate Logistics’ Senior VP of Strategy and Innovation Tom Curee discussed Kingsgate’s approach to digitization and carrier engagement. The webinar, entitled Kingsgate’s Innovative Solution: Keeping Up with Digital Technology, centered on how Kingsgate is using Trucker Tools’ white label carrier portal, Broker Advantage, to offer better service to its carriers and build relationships with new carriers. Kingsgate first introduced the portal to its core carriers and now is in the process of rolling out the portal to carriers outside its core network.

Read on to learn more about why Kingsgate Logistics is using Broker Advantage, how it fits into the company’s strategic goals, and the benefits that the portal provides to carriers.

According to Curee, five years ago the Kingsgate leadership team took a close look at the company, where it was growing, and the needs and opportunity that lay ahead in the future. The Kingsgate team saw vendor partnerships as a key component of its tech strategy and sought out technology partnerships that would allow the company to meet its strategic goals. Today, Kingsgate Logistics has a core group of tech partners, including Trucker Tools, that it works with to meet customer and carrier needs and anticipate what will be needed next as the industry evolves.

“I think a lot of people get caught up on what does technology do today and they’re just buying what they see today,” said Curee. “We went into that process buying not only what we were going to get today, but what we saw coming for the next three to five years with those vendors. It allowed us to build a core network of vendors that would allow us to meet our strategic goals and work well with our team.”

The Benefits of Broker Advantage

“The carrier experience is really what it all came down to for us,” said Curee. “As we’ve continued to grow and diversify our team, our book and the lanes that we manage, we’ve been able to onboard a lot more of these dedicated carriers that may run entirely for the Kingsgate team. These carriers have been reliant on getting in touch with one person to be able to get shipments and we wanted to give some of these carriers the opportunity to become first movers. It’s like my kids calling dibs on which seats they’re going to sit in when we’re in the car. We wanted to extend that to carriers that have been a core part of our network. They have high service levels. They score very well on our carrier scorecards. We wanted to provide a highly customizable option for them to come get more in-depth with our network.”

Curee said that Broker Advantage is helping these carriers plan out their weeks and to be more strategic in which loads they book. According to Curee, the level of service that the company can provide to carriers via Broker Advantage is something that the Kingsgate team has wanted to be able to offer its core carriers for quite some time. He also noted that being able to offer that service on the strength of the Trucker Tools network has allowed Kingsgate Logistics to form new carrier relationships.

“One of the things that we were most excited about in the new Broker Advantage portal that we set up is that when our actual carrier network comes into the portal, they can select a load and then look at the reloads that we have coming out within a certain radius of that destination,” Curee explained. “They can do that multiple times, as long as the freight is in our network, and continue to stack these reload opportunities. That’s one of the great benefits of Broker Advantage that our carriers haven’t had access to before. Many of them use Book-It-Now, where rates are already listed, to book a load. They also can say, ‘I want these three loads right now’ and those loads can come into their cycle and immediately be tendered. It’s a great part of the Broker Advantage portal. It’s one of our favorite features.”

The Kingsgate team first reached out to its highest-scoring carriers to determine who would have access to Kingsgate’s Broker Advantage portal. The strategy behind this approach was to reward high-performing carriers by giving them the first opportunity to interact with the portal. Curee said that the Kingsgate team also did this to learn from these carriers and get their feedback on the portal. Presently, only Kingsgate Logistics’ core carriers have access to the portal. The next phase of the roll-out will include out of network carriers who are interested in forming a deeper relationship with Kingsgate Logistics. Curee also shared that much of the feedback from carriers so far has been, “Why didn’t you do this sooner?”

For the rest of the conversation, watch the webinar on demand. Schedule a free demo of Trucker Tools’ Smart Capacity and Broker Advantage.