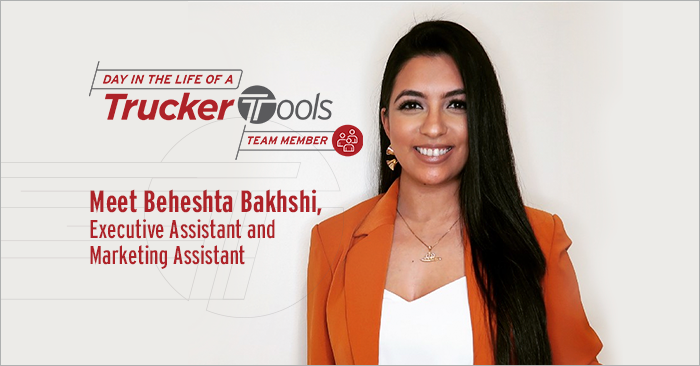 In this new blog series, we’re introducing you to the folks working behind the scenes at Trucker Tools. For our first blog in this series, we interviewed Beheshta(Bebe) Bakhshi, who’s been with Trucker Tools since 2018. Bebe is one of the many glue people that keeps Trucker Tools going. She is an executive assistant to the CEO of Trucker Tools, Prasad Gollapalli, and also a member of the Trucker Tools marketing team. Bebe is known for her kindness, willingness to pitch in and positive attitude. Before joining the Trucker Tools team, she worked for a telemedicine company for four years as a consult care coordinator. Bebe is passionate about helping others and absolutely loves the morning (yes, really!).

What Bebe Does at Trucker Tools

“As executive assistant, I used to manage and update Prasad’s day to day tasks. Before COVID, I used to also manage all travel arrangements, coordinate trade shows, conferences and organize all board meetings for Trucker Tools . Due to the pandemic, there isn’t much traveling and we’re still working remotely. So since, I’ve had a lot more time in my hands and therefor, I started helping the marketing department. Helping the marketing department has been delightful! I have taken over posting blogs to our website, helping with weekly emails, monthly newsletters and creating and executing surveys. I also handle all promotional swag materials, such as stress trucks (stress balls that look like a truck), golf polo shirts, t-shirts, hats, pen, etc.”

What Bebe Likes About Working at Trucker Tools

“I’m just super grateful to be a part of Trucker Tools, it has been a pleasure to be a part of an organization that has grown so much in the past three years and to work closely with such outstanding team members. Trucker Tools gave me an opportunity of becoming an executive assistant and also a marketing assistant with little to no experience in those roles and believed in me and I’d like to say that I did not let them down. I’ve learned so much from both of the executives that I’ve worked with, Prasad (CEO) and Dagmara (VP marketing) and for that I’ll always be grateful.”

What Bebe Likes To Do Outside of Work

“For the past month and a half or so now, I have been super busy devoting my free time to the Afghan refugees who have been coming here from Afghanistan. I have been volunteering to translate since I am fluent in Dari. I’ve been translating for some of the families and have been working closely with a caseworker at Lutheran Social Services. I also had a donation drive where I was able to (with the help of a few friends) collect clothing and other donations. We’ve been sorting through all the clothing and donations that we got and delivering them to the families from Afghanistan.

I came to America 20 years ago with my family as refugees. I know and remember how it feels to come to a different country, leave everything behind and to not know the language. Part of what motivated me to volunteer my free time to help in any way that I am able to. I remember my parents feeling so relieved when we would meet someone that spoke our language. I feel so honored and blessed to be able to do the same to the afghan refugees that are coming into America today.”

“I have always loved to help people, and I think it kind of ties into why I have chosen the executive assistant role as a career. Knowing that I can make someone’s day a bit easier, brings me joy! In my role at Trucker Tools as an executive assistant, I was able to help the CEO & Founder, Prasad, that was a huge deal to me. Someday I also would like to start a nonprofit organization for women and children in need who maybe come from an abusive environment, are seeking shelter, that need daycare or that need help finding jobs. I am looking forward to being able be in a position in the near future, where I would be opening my nonprofit for women and children.”

Something Many People Don’t Know About Bebe

“I’ve lived all over the world. I was born in Afghanistan, but I lived in Russia for 10 years. I can speak Russian, as well as English and Dari.”