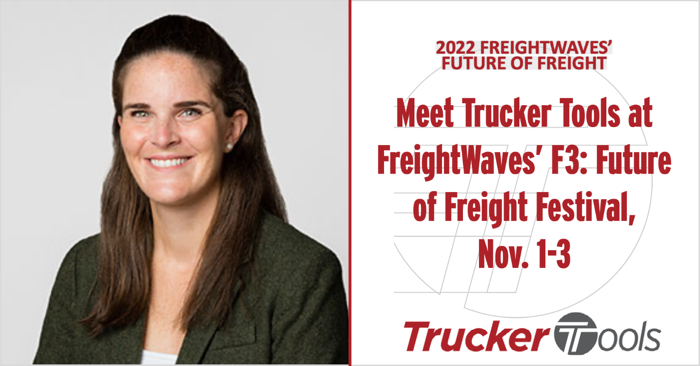 Trucker Tools is a regional sponsor of the 2022 Future of Freight Festival and will present a live, seven-minute demo of its Smart Capacity software platform and a sponsor kiosk as part of the festival. Trucker Tools’ CEO Kary Jablonski will be a guest on the FreightWaves’ podcast “Put That Coffee Down” as part of the event, as well.

Trucker Tools’ Live Demo, Sponsor Kiosk and Interview on “Put That Coffee Down”

On Tuesday, Nov. 1, at 10:25 a.m. as part of block 1 of the rapid-fire demos on the General Session Stage, Trucker Tools’ CEO Kary Jablonski and Mid-Market Sales Manager Chuck Tantillo together will conduct a live demonstration of Trucker Tools’ Smart Capacity software platform. Smart Capacity includes real-time visibility, digital freight matching and Book It Now® capabilities that help freight brokers and 3PLs like you operate with greater efficiency while building carrier loyalty. You can learn even more about Trucker Tools and Smart Capacity by visiting our sponsor kiosk at F3.

On day two of the festival, Jablonski also will be a guest on the FreightWaves podcast “Put That Coffee Down.” She will be interviewed by hosts Kevin Hill, FreightWaves’ Executive Publisher, and Justin Richie, RevUnit’s V.P. of Data, about Trucker Tools’ new integration FreightWaves SONAR. You can catch the interview live on the FWTV Stage on Wednesday, Nov. 2, at 8:45 a.m.

On day one of The Future of Freight, keynote speaker Peter Zeihan, author of “The End of the World is Just the Beginning: Mapping the Collapse of Globalization,” will join FreightWaves’ Founder and CEO Craig Fuller on the General Session Stage at 8:10 a.m. Immediately following, industry keynote speaker J.B. Hunt Transport Services’ Executive V.P. of Sales and Marketing Spencer Frazier also will speak to attendees.

To learn more about FreightWaves’ 2022 The Future of Freight Festival, visit https://live.freightwaves.com/f3-future-of-freight-festival.