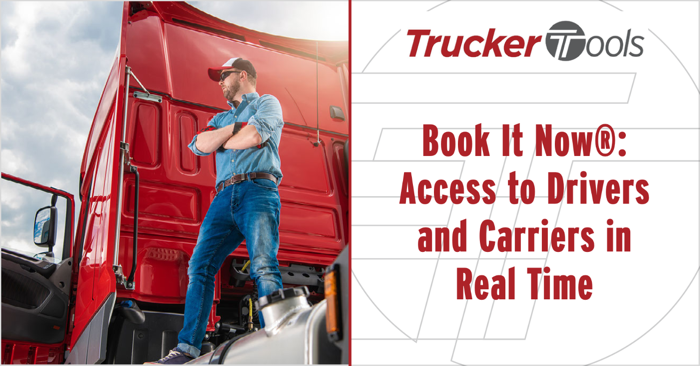 Read on to learn more about how Book It Now® provides you with access to drivers and carriers in real-time— and how that benefits your brokerage.

How Book It Now® Works

When you post loads as Book It Now® loads to Trucker Tools’ Smart Capacity software platform, you must include all the details on the loads, including your preferred rates. Once your Book It Now® loads are posted to Smart Capacity, drivers and carriers can view and book those loads at your preferred rate through Trucker Tools’ free mobile app or free carrier software platform.

Book It Now® integrates with your transportation management system, which means when carriers or owner operators book your Book It Now® loads, the appointments are automatically scheduled in your TMS. Carriers and drivers also have the option to negotiate the price on loads by sending you a digital rate quote if they want to propose a higher rate. As a freight broker, you can easily see within Smart Capacity (or right in your TMS) which loads you have bids on and you can respond to those bids with a few clicks of your mouse.

Sourcing capacity with load boards, phone calls or email messages doesn’t give you access to owner operators and carriers in real-time. Carriers and owner ops may not answer your call when you call them and so you have to leave a message and wait for them to call you back. Sourcing capacity with email messages involves waiting for responses from carriers and drivers, too. There’s often a time lag between when you email carriers and when they read the message and potentially call or email you back. Even though load boards are digital, they have the same problem. When you’re looking at truck capacity on a load board, it can be difficult to tell whether or not it’s already been taken by another broker because it’s not a real-time technology.

Trucker Tools’ Smart Capacity and Book It Now® give you digital access to carriers and owner operators in real-time, which is extremely powerful. Imagine that a carrier sees one of your loads online and wants to book it, but the rate you have listed is just a little too low. Instead of calling you, the carrier sends you a quick message asking for $200 more and you receive the bid nearly instantly via Smart Capacity. With a few clicks of your computer mouse, you can agree to the carrier’s preferred rate and automatically book the load. You also have the option to send a counteroffer to the carrier via Smart Capacity. This real-time access to drivers and carriers is much more efficient than manual capacity sourcing methods. It allows you to source capacity much faster. If you work on commission as a freight broker, real-time access to drivers and carriers could mean brokering more loads and increasing your earnings.

In a survey conducted last year, Trucker Tools asked 255 drivers about how they use technology to get loads. One stand-out stat from the survey results is that 85 percent of the carriers and owner ops surveyed use technology such as apps, computers and/or websites as part of their day-to-day routines. More than half of carriers reported booking six or more loads digitally in the previous two months. When asked how loads will be booked five years from now, 64 percent said they believe it will be done through apps and online.

It’s clear that most carriers and drivers are embracing real-time digital technology as part of doing business. They know that it helps them save time and money, cutting down on manual tasks such as answering phone calls and email messages from brokers. Using technology like Smart Capacity that provides you with real-time access to capacity while also benefitting drivers and carriers can ultimately help you become a broker of choice among both.

“Broker Tip: Create Smart Routes To Save Time.” Schedule a free demo of Smart Capacity and Book It Now®.