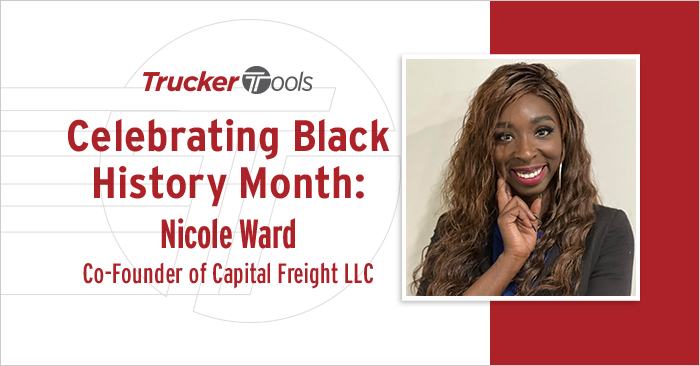 In honor of Black History Month, we’re shining a spotlight on Black professionals from across the trucking and logistics industries — from company drivers, owner operators and fleet owners to freight brokers, 3PL owners and entrepreneurs.

We recently had the good fortune to speak with Nicole Ward, co-founder and logistics director of Capital Freight LLC, an Atlanta-based trucking and logistics business. Nicole’s parents emigrated from Kingston, Jamaica, in 1983 and came to the United States with a dream of continuing their family legacy as entrepreneurs — and that they have. Before entering the trucking industry, Nicole’s mother Donna Sheppard, who is a co-founder of Capital Freight, owned and operated several businesses in Orlando, Fla. Prior to founding Capital Freight with her mother, Nicole worked for 18 years in the insurance industry in various roles, including a stint leading an insure-tech company.

Read on to learn more about Nicole’s introduction to the trucking and logistics industries and the success she and her mother have achieved with Capital Freight.

Ready for Change with a Family Business

Two years ago, Nicole had an opportunity to work with her ex-boyfriend who had a small fleet of about 20 trucks. She used the experience she’d gained as an executive in the insurance industry to organize his fleet and create some new processes in the business. As a result of her efforts, the business doubled its profits from the previous year. Burnt out by a demanding career in the insurance industry, Nicole saw opportunity in trucking. She loved working in trucking, but recognized that technology is often being underutilized.

“I saw the difference that technology made in the insurance industry after 18 years,” Nicole said. “I felt that I would be able to really come in and bring a lot of the skillset that I had used in the insurance industry to trucking and felt like I would be able to be a rock star in this industry. I approached my mom and told her I needed her to go to trucking school. That was December of 2020. My mom is young and so she went to trucking school and got her CDL. Within a few months, she graduated and I said, ‘Mom, we’re going to open this trucking company, but I need you to go work for the big boys and really see what happens on that side of the world.’ She did exactly that. Every day, she came home and would say, ‘Hey, I’ve got to learn how to do this. This is something I want to make sure that we do.’ I considered it a paid training and she worked for what I would now consider a competitor for a few months while I built the back end of our business, which put us in a really stable position. We found out how hard it was out there, though, especially for African-American women. I put my life savings into this and here we are.”

According to Nicole, the pandemic gave her a bit of a push to start the business. She saw how store shelves were bare and that rates per mile were up significantly. She told us that she used most of her savings to get the business started and that she knew based on her mom’s experiences as a driver how she wanted to run the business.

“One way we thought we could differentiate ourselves in trucking was around the treatment of people,” Nicole said. “My mom and her colleagues felt like they were treated like cattle, that they were just running until they couldn’t run any more. They felt like no one cared about how many hours were left or whether they needed to reset. They felt like all anyone cared about was getting that load from point A to point B, and not really paying. They were getting some of the lowest pay, even though rates had increased. It’s just unfortunate how drivers are often not paid well but are expected to remain on the road for two to three weeks at the lowest rate per mile. We knew that was something we didn’t want to do with our company. The money is out there, so pay the people. They’ll work harder for you if you provide them with some incentives for being gone. Just treat them like people.”

Since Nicole and her mother founded Capital Freight, none of their drivers have left the company. Nicole says this is because she and her mother listen to their drivers’ concerns and treat them well. She said it makes sense to reward drivers and pay them higher amounts when the company is doing well. Nicole also told us that Capital Freight helps each driver come up with a 10-year career plan to help them get to where they want to be professionally.

Part two of our conversation with Nicole will be available soon on Trucker Tools’ blog.