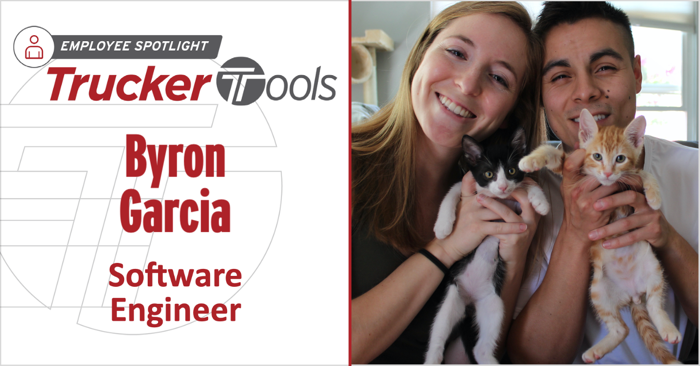 In this ongoing blog series, we’re introducing you to members of the Trucker Tools team, from the folks answering your support calls to those working behind the scenes creating our software platforms. This newest Employee Spotlight is all about Byron Garcia. Byron joined the Trucker Tools team 16 months ago. He is a software engineer who works primarily on the front end of Trucker Tools’ web applications including our carrier and broker facing digital freight matching web applications. Byron currently calls San Diego home and before coming to Trucker Tools, worked as a software engineer for two large defense corporations. When he’s not at work, Byron enjoys video games, watching MMA and UFC matches, and spending time with his wife.

Pets: Two cats, Thor and Loki, and several puppies that his wife is raising to be service dogs

What Byron Does at Trucker Tools

“My title is software engineer, but I work primarily with the front end portion of the web applications,” Byron said. “I work with the carrier facing web platform as well as the broker facing web platform for Trucker Tools’ digital freight matching products. I came to Trucker Tools in July of 2021, but I still feel very fresh in terms of what I do for my job. There’s still a lot to learn.”

“Before coming to Trucker Tools, I was a software engineer for two big defense corporations,” Byron shared. “They have big government contracts with the military. I did that for three years and it was a very different line of work. It was mostly lower level engineering, so closer to the hardware with C and C++, whereas this job is more like a higher level. It’s with JavaScript, so it’s a different programming language and there are a lot of different concepts that I had to learn just to start this job. Even though I was a software engineer in title in my previous job, they’re almost completely different jobs. I’m much happier here at Trucker Tools.”

What Byron Likes About Working at Trucker Tools

“I came to Trucker Tools because I wanted to try the commercial sector instead of the government sector,” Byron said. “Government jobs are a lot slower just because there are so many processes in place to handle security. To test software updates, it would take upwards of an hour. With Trucker Tools, it’s a single click of a button. It’s a lot more rewarding because I’m able to do more in a shorter amount of time here at Trucker Tools. Working remotely is really nice, too. I don’t like driving at all, so working from home is a best case scenario for me. I also like that Trucker Tools is a small company. I like the level of camaraderie at Trucker Tools. Here, everyone is working together and as engineers we have a lot more to do and everything is a lot more visible, which I like.”

“I like the level of camaraderie at Trucker Tools. Here, everyone is working together and as engineers we have a lot more to do and everything is a lot more visible, which I like.”

Byron’s Life Outside of Work

“I like playing video games,” said Byron. “It’s one of my favorite pastimes. Over the past few years, I’ve been playing Destiny 2. I’ve gotten to a point where I’m almost too lazy to learn new games, so once I play one I just stick with that one for a while and then maybe start picking up another along the way. Aside from that, I enjoy spending time with my wife. I like the Marvel Cinema Universe a lot. I’m a pretty big fan of UFC and MMA, too.”

“It’s a cliche answer, but my parents are my heroes,” Bryon said. “They came here from Central America when they were young and they went through a lot just to get to where they’re at today. They really set me up well to progress my life in a good positive direction.”