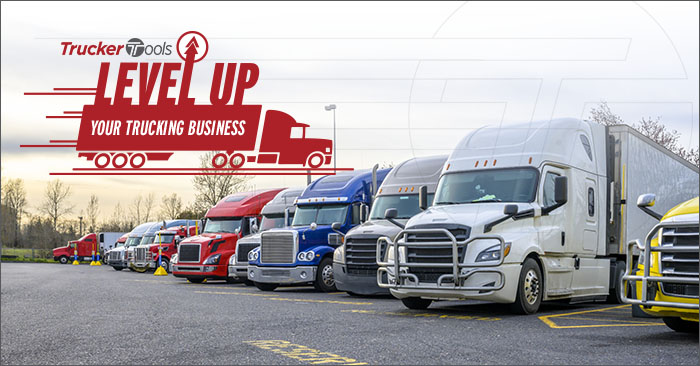 If you’ve launched a new carrier business in the last year or you’re thinking of doing so, you’re not alone! In 2020, the FMCSA granted common authority to approximately 58,000 motor carriers, a 36 percent increase over the previous year. With this in mind, Trucker Tools recently interviewed two different trucking company owners, Shawn Stewart and Jovanic Bontemps, for their advice and tips for building a successful, profitable trucking company. Shawn is an owner operator, mechanic and co-owner of Pinnacle Transport Inc. in Seminole, Fla. Jovanic is an IT professional who launched his Georgia-based trucking company, FR8UP Logistics, last year. Check out these five tips from Shawn and Jovanic on how to build a successful trucking business from the ground up!

1. Plan for Start Up Costs, Reduced Cash Flow in Early Days of Business

“You should assume that your cash flow will be limited for at least a 60 day period,” said Shawn. “You may have to wait 30 to 90 days to get paid on a load. There are always little Gremlins that pop up, such as all those fuel costs, before you ever see a check. One major breakdown can take down your maintenance fund.”

“You should assume that your cash flow will be limited for at least a 60 day period,” said Shawn. “You may have to wait 30 to 90 days to get paid on a load. There are always little Gremlins that pop up, such as all those fuel costs, before you ever see a check. One major breakdown can take down your maintenance fund.”

According to Jovanic, the expenses associated with necessities such as insurance can be a stumbling block for new carriers, especially in the early days of a trucking business.

“The insurance can be a make or break expense, honestly,” Jovanic said. “We are at $28,000 now and depending on the type of driver you bring on, that can increase. We had one new driver come in with a clean record, but the insurance company wanted to increase our annual premium by $30,000. At that point, unfortunately we were unable to bring that driver on.”

“The insurance can be a make or break expense, honestly,” Jovanic said. “We are at $28,000 now and depending on the type of driver you bring on, that can increase. We had one new driver come in with a clean record, but the insurance company wanted to increase our annual premium by $30,000. At that point, unfortunately we were unable to bring that driver on.”

“My biggest advice especially right now is to buy older trucks with fewer moving parts,” Shawn said. “That’s one of the biggest lessons I’ve learned over the years. My 1999 FLD has eight sensors on the motor. My 2005 International has 19 sensors with an engine control unit that will shut down the motor if the sensor is reading something wrong. You don’t want to get stuck because of a sensor malfunction.”

Shawn also told us that a laptop may be needed to diagnose problems and fix newer trucks, which can make your life difficult. For example, if your fuel pump goes in a newer truck, you may need a laptop to fix it. Shawn said that with older used trucks, you can fix some problems yourself without a computer, which gets your truck back up and running faster. He also said that parts on newer trucks and engines can be much more expensive than parts for older trucks.

“Our biggest hurdle so far has definitely been personnel, getting good drivers and keeping them,” said Jovanic. “Vet your drivers. We have the expression in this industry of ‘If the wheels aren’t rolling, you’re not making money.’ That’s absolutely true, but don’t let that rush you to put just anybody in the truck because if you put the wrong driver in your truck, it could be detrimental and your loss could be exponential. If your truck is sitting, that’s an opportunity lost that you’re missing out on, but if you have the wrong driver in your truck, that can cause damages and expenses that far exceed the cost of sitting your truck.”

Jovanic said that FR8UP Logistics is constantly improving its process for vetting drivers, not just from the insurance standpoint – whether they have violations or accidents – but from a performance standpoint, as well. Jovanic says that new trucking companies should look for drivers who take pride in what they do. Jovanic recommends hiring drivers who are good about getting their paperwork in on time and who will be honest and tell you if something happens with the truck on the road. He also advises new carrier owners to look for drivers who are diligent with their pre-trip and post-trip inspections.

4. Use Persistence To Win Contracts, Build Your Business

Most of the loads that Pinnacle Transport moves are contracted directly with shippers. When we spoke with Shawn, he was in the Orlando area visiting industrial parks to hand out carrier packets and promote the business to manufacturers in the area.

“I’m the one that finds the contracts,” said Shawn. “I do it old school. As my grandfather used to say, if you want to do business with a person, you have to meet them face to face and shake hands. Granted, that’s a lot harder today. I recently printed out 150 carrier packets and I’ve been visiting various industrial complexes in person. When it comes to building relationships, you just have to be persistent and get to know the customer. It’s kind of scary and I have to psych myself up to do it. I mean, everyone hates rejection. The biggest thing is that you have to be passionate about hauling freight and you have to follow up with potential customers.”

When Shawn joined Pinnacle, the company had a single account and five trucks under its authority. Today, the company has 38 trucks on the road and its main account is Amazon. The company moves dry van, flatbed and reefer freight within the state of Florida currently, but hopes to expand into Texas and Georgia within the next five years.

“I’ve learned that budgeting is very important and that you’ve got to find a way to keep going,” Jovanic said. “Even if you’re not making money or you’re in the red or if you have a lot of money coming in or if most of your profits are going to upkeep of your truck…just keep going. All it takes is a month or two without major instances to put yourself in a good position. It’s also important to have your maintenance account and put something toward it with every load or every week. Know your break-even points, which is very important.”

According to Shawn, having a business plan in place is crucial, as well, whether you want to become an owner operator or fleet owner. He highly recommends hiring a CPA to make sure that you file your taxes correctly. Shawn told us that he waited too long to hire a CPA and lost out by not writing off some key business expenses, such as depreciated equipment. He said that if you’re not good in one aspect of your business, you shouldn’t be afraid to hire someone like a CPA.