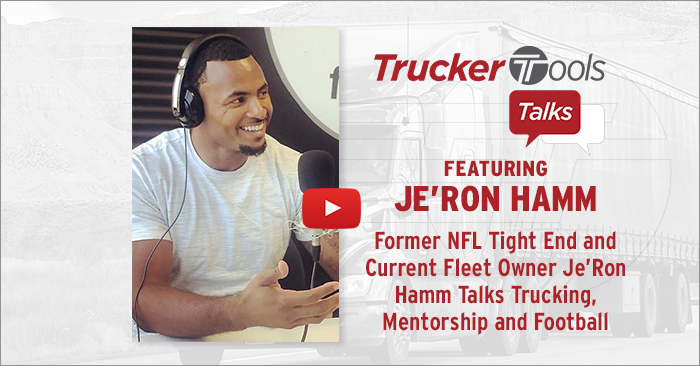 In a recent episode of Trucker Tools Talks, our weekly interview series, Trucker Tools’ Director of Onboarding and Implementation Russ Bennett sat down with Je’Ron Hamm, owner of Pro-Haul Logistics and CEO of Pro-Haul TV. Before Je’Ron got into trucking, he was a tight end in the NFL, playing for teams such as the New Orleans Saints and the San Francisco 49ers. After an injury sidelined him from playing pro football, Je’Ron founded his own trucking company in 2018. In his interview with Russ, Je’Ron discussed why he chose to get into the trucking industry and his mentorship of new truckers. Of course, we also asked Je’Ron about his favorite pro and college teams and how his career in sports has helped him succeed in trucking.

How and Why Je’Ron Got into Trucking

“I was in the NFL for five years and at the end of my third year, I broke my leg,” said Je’Ron. “So my fourth year was spent recovering from a broken leg and in that time, I realized that my football career could end. I tried being a personal trainer and that wasn’t working for me. My girl’s dad was here visiting during that time. While he was here, he told me about the money in trucking and I thought that sounded good, but I didn’t know how to drive a semi. When we dropped him off at his truck, I saw that he wasn’t driving a semi. He was driving a dually and I was like, ‘Oh, you’re making that money with that set up.’ He told me it’s called hot shot. I was thinking that at least I could generate some income and drive a dually. That was my intro to trucking, straight from the football field to trucking.”

Je’Ron got his MC number in 2018 and started running hot shot loads across the United States. He eventually added some semis to the mix and today his company Pro-Haul Logistics specializes in flatbed, but also does some power only and dry van shipping. Je’Ron prefers flatbed because the scheduling is different than dry van or refer. According to Je’Ron, long wait times at shipper and receiver facilities are less common running flatbed. Though Je’Ron’s trucking company has the authority to run the 48, due to the high cost of fuel, most of his drivers currently are running the Southeast and Midwest.

Perseverance On and Off the Field

In the interview, Russ also asked Je’Ron about the similarities between football and trucking.

“Every day is a new challenge,” Je’Ron said. “Also, the work ethic. You have to put in the time for it to be profitable and be worth your time. Number one is just the perseverance you have to have out there to get through. There are so many ups and downs and it can get mentally draining if you aren’t prepared for it or you’re expecting something easy. That’s the biggest thing that trucking and football have in common — you have to be able to persevere through adversity on the football field and in the trucking world. Trucking can be a stressful business, which I wouldn’t have imagined based on the conversation I had with my girl’s dad early on.”

“Being somebody who came straight from football to hot shot with no experience, I started documenting it all on Pro-Haul TV and on YouTube,” said Je’Ron. “I just made a little channel and I didn’t expect it to grow too big. I was excited when I got 50 subscribers. As I grew and continued to document my journey, I started to get a lot of questions from people who were doing the same thing as me — jumping from one career into trucking to be a hot shot. I was spending so much time mentoring new drivers for free that I decided to package something together and offer it as a service. That’s how I got into consultations and really having a detailed package on what I can help people achieve as far as getting their process going.”

Just for fun, Russ also asked Je’Ron about which college and pro teams are his current favorites. Je’Ron said that he’s from Louisiana, so he follows LSU. He also told Russ that he follows Alabama because he’s intrigued by the winning culture that Nick Saban has created. On the pro side, Je’Ron likes the San Francisco 49ers and Washington because he played the most with those two teams. To learn more about Je’Ron, visit his trucker training website https://www.prohaultv.com. For the entire conversation with Je’Ron, watch the full episode of this Trucker Tools Talks. To download the Trucker Tools driver app, visit https://www.truckertools.com/web/carriers/. To start using Trucker Tools’ free carrier software platform, visit https://bookaload.truckertools.com/.