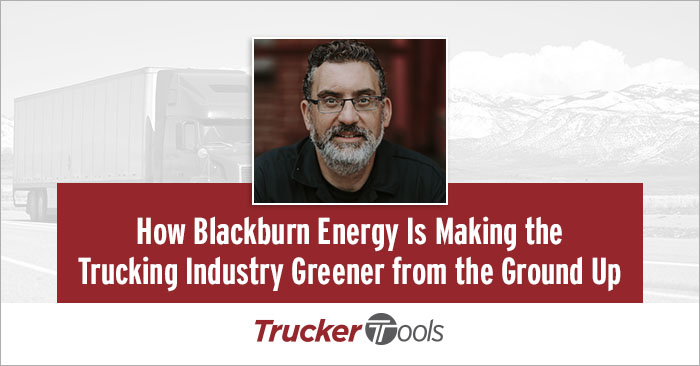 When you hear about green energy and a more environmentally-friendly vision for the supply chain, you probably think of electric trucks, anti-idle laws and government mandates. We recently spoke with Blackburn Energy’s CEO and Founder Andrew Amigo whose innovative driveshaft-based kinetic energy recovery system takes a different approach to making trucking greener and cleaner. Inspired by his own experience as a trucker and leveraging his experience with technology development, Amigo and has team have developed an energy recovery system that stores the energy generated by the spinning force of a truck’s drive shaft to power electric APUs and liftgates.

Read on to learn more about what inspired Amigo to create the company’s hybrid charging technology, how it works and about Blackburn Energy’s recent funding from the Toyota group.

Amigo himself is a trucker and grew up in a trucking family. After working as a roofer doing construction, driving for FedEx and doing local truck routes, Amigo went to college and eventually went on to work in a corporate venture capital group that was developing and investing in technology. One day when he was sitting in traffic, a box truck rolled by Amigo’s windshield and inspiration struck.

“Around 2008 or 2009, I started thinking about electric vehicles, as I’d been doing a lot in EVs, telematics and trucking,” said Amigo. “I was sitting in traffic one day next to a box truck watching the driver as the truck rolled by my window and it occurred to me that I could make clean energy from the wasted energy and motion in a truck. I started taking notes and came up with the original ideas right there sitting in traffic and got the motivation to start the company. A big theme that’s driven us over the years is this notion of creating a technology that comes from the bottom up. I totally believe in the clean energy world and think we need to get cleaner and greener, no question. I’m all in, but I don’t like the approach. One of the things that irritated me early on and motivated me to get going with Blackburn was all of the anti-idle laws that were being pushed. I really took exception to the notion that the way we’re going to fix that is take it out on the drivers — the people with the least amount of power, the people with the least ability to change anything. That just struck me as wrong-headed. When I was developing Blackburn and our technology, I wanted to bring technology to the folks at the bottom of the pyramid that was affordable, that would actually give them clean energy and that would allow them to live a decent life.”

Blackburn Energy’s RelGen hybrid charging system harvests the wasted energy within the truck. Any time that a truck must slowdown, a tremendous amount of energy is lost due to heat and friction. Blackburn Energy’s system installs on the drive line of the truck with no modifications to the drive line. The stock center bearing is removed and the Blackburn RelGen system is bolted to the driveshaft. A high efficiency alternator is hung next to it and connected to a belt in a way that doesn’t require any changes to the powertrain geometry. The final part of the system is a control module and an algorithm that cycles the system on and off. When the trucker steps on the brake and slows down, the system is cycled on electronically and takes the power from the rotation of the driveshaft and the spin on the alternator to create and store electricity.

“We are not turning a truck into a Prius, so our technology is not trying to drive the truck down the road and this is where we’re very different from an awful lot of people out there,” Amigo shared. “We’re not trying to run the drive the vehicle on battery, but there is still an enormous opportunity to harvest wasted energy. Every time you take an 80,000 pound vehicle and you slow it down from 60 mph, you’re throwing away a tremendous amount of energy to heat and friction, which is an opportunity for us to harvest, store and then use that electricity in smart ways to make the vehicle more efficient, the driver’s life better and the equipment run more efficiently, and to avoid breakdowns. It’s designed to be very simple, very easy to install and very easy to maintain. In fact, we spent two years stripping out complexity from the system and making it simpler so that any mechanic in the industry within a few minutes can understand how the system works and be able to install it, service it and maintain it.”

Amigo told us that the two most popular uses for Blackburn Energy’s kinetic energy capture and storage system are to power sleeper cab APUs and to power lift gates. The Blackburn team also has started working on electrifying diesel engine components, cooling fans, power steering pumps, and taking the parasitic load off the truck motor to increase the overall fuel economy of the vehicle.

Reaching Fleets Across the World with Toyota

“For us, it’s really exciting to have that kind of a partner with their resources, their technology, their approach, their connection,” Amigo said. “Everything that the Toyota Group brings to the table is really for us just additive and super exciting. We’re already starting to get into some pretty amazing conversations and deepening the relationship, perhaps having them do the assembly work and perhaps taking over different parts of manufacturing and assembling logistics. We haven’t done that yet, but there’s a lot of potential to grow the relationship over time and move into new areas. Right now, they are our largest investor and they’re a partner on the sales and distribution side. The investment is huge. It allows us to double the company and really start to scale. I’m very, very proud of the team here for sticking with it and coming to work every day, even if it was remote at home or in the office. We stuck it out and that really is a big reason why we have the investment and the relationship to show.”

If you’d like to learn more about Blackburn Energy, visit https://blackburnenergy.com.