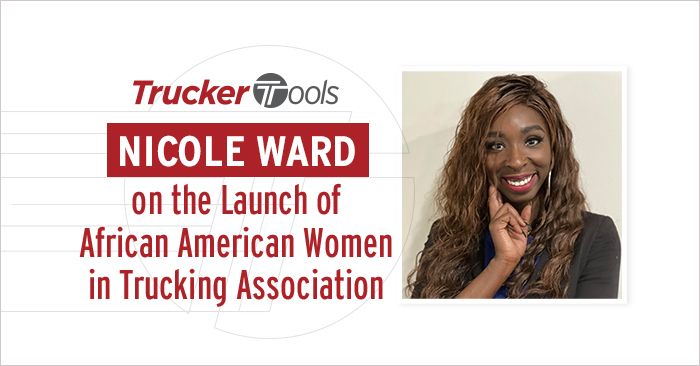 If you’re a regular reader of Trucker Tools’ blog, you know that we love talking to drivers, carriers, freight brokers, and logistics company owners from across the trucking and transportation industries! We recently had the pleasure of speaking with Nicole Ward, co-founder and logistics director for Atlanta-based Capital Freight LLC. Nicole also is the co-founder of the first official national trucking association for Black women, the African American Women in Trucking Association. When we spoke with Nicole, she shared with us how the new association came to be, what she hopes to achieve with the association and the role that she sees the association playing in the trucking and logistics industries — all of which we share with you here.

The Seed Is Planted

Nicole told us that when she and her mother, Donna Sheppard, founded their freight broker and trucking business, Capital Freight LLC, that she went online to learn about the transportation industry. One of the groups she joined was a Facebook group called African American Women in Trucking (previously known as Trucking Divas Rock).

“There are a lot of Facebook groups out there that support truckers, but very few groups that support women and even fewer Facebook groups that support African-American women in trucking,” Nicole said. “I was able to tap into a few of those groups, which I think absolutely helped me. In particular, I had an opportunity to find one group that was absolutely incredible, African American Women in Trucking. The group had a lot of information posted to it, but it was a little outdated. I thought it was and is such a strong name. I saw that a lot of the women in the group were asking questions, but people weren’t responding. I had that experience and was doing all this research, so I had a lot of the answers and so I began responding to some of the questions.”

Nicole eventually discovered that the Facebook group had been founded by Gertrude Jackson, a trucker who passed away from stage 4 breast cancer in 2014. Since her death, the group continued to add new members like Nicole and was run by Gertrude’s best friend as a resource for approximately 3,000 African American women truckers. Nicole reached out to Gertrude’s best friend and asked to get involved with the Facebook group.

“When I reached out to Gertrude Jackson’s best friend, she asked me if I was interested in taking over the Facebook group and helping others and the answer was, ‘Absolutely!’” Nicole explained. “I told her that I want to pursue her friend’s dream because it’s mine, too. It couldn’t get any better than that, that I inherited the group because Gertrude passed away in 2014 and the women have just been supporting one another within that group since. In the less than 30 days since, I’ve just been engaging with the women and have a number of things that I’ve been putting in place for them. Based on those interactions and knowing about Gertrude and the history of the group, I decided to take it a step further and turn it into an association. It warms your heart because I could feel her. Gertrude was changing her life. She got into a male-dominated industry where she hardly saw anybody that looked like her at that time and wanted to help others like her. She had a heart for women in trucking and Black women in trucking, because it’s even doubly harder.”

“I want to carry this on for Gertrude Jackson and make her dream become something real,” Nicole shared. “She is one of the reasons why I’m pushing forward on supporting African American women and creating this African American Women in Trucking Association. This association will be an empowerment platform that supports the future of logistics and trucking. I want to provide anybody that’s interested in entering this field with a support system that gives them a strategic growth plan with some form of financial support. We want to offer grants for getting certifications like hazmat certification, which having even something as simple as that can increase how much money you’re making. A lot of women can’t afford to even get into trucking, so we’re going to be looking to get donations and things of that nature to send women to school, whether it’s trucking school, freight broker school or just to further their education to make sure that they’re successful in the world of trucking.”

The African American Women in Trucking Association is a 501c3 organization, which gives it non-profit status. Nicole’s cousin, Katavi Jones, co-founded the association with Nicole and will act as its vice president. According to Nicole, the newly launched association is in the process of putting together its first fundraiser right now. The association was launched in February specifically to celebrate Black History Month.

“I tell you, I plan to change the trucking industry and that’s the goal and it’s going to happen because I’m watching it happen now,” Nicole said. “The association is going to help so many others. I want women to know that we support one another and I support them — and I’m going to do everything in my power to continue to do so.”