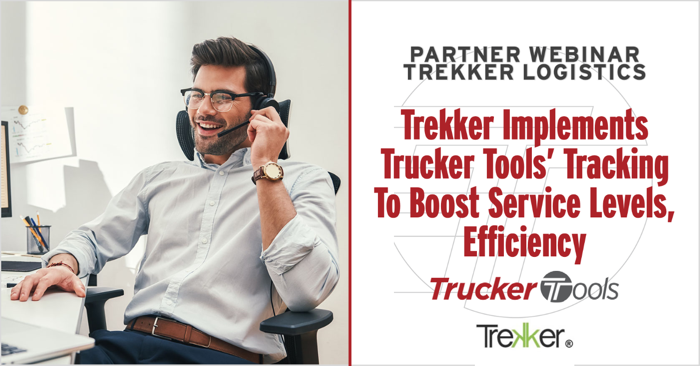 In a recent webinar with Trucker Tools, Trekker Logistics’ Director of Logistics Dominic Swanfeld outlined why the company chose Trucker Tools for real-time visibility and the results realized since the roll-out. Before implementing Trucker Tools’ visibility solution, the brokerage struggled to achieve tracking compliance rates above 70 percent. In the two months since Trekker implemented Trucker Tools’ tracking platform, Trekker has been able to increase compliance to nearly 90 percent.

“We are a full service, asset-based brokerage with offices in Northwest Arkansas and Bogota, Columbia,” Swanfeld said. “We are a 200-truck company with 100 million in revenue and approximately 18,000 truckloads a year. Before we partnered with Trucker Tools, our tracking was really hit or miss. We would get folks tracking and then we’d have to follow up with phone calls to confirm they were where they said they were. There was time wasted when it was meant to give us some more efficiency.”

“We needed more reliability and more efficiency,” said Swanfeld. “We were running just under probably 65 or 70 percent compliance with MacroPoint, the tracking application we used to use. We struggled continuously on getting drivers to accept the tracking and to be updated along the route. We went to a McLeod conference and met up with Trucker Tools’ staff there. We had heard about Trucker Tools along the way as we would speak to drivers to put them on tracking. They’d ask, ‘Is it Trucker Tools?’ We really like the fact that it’s not a long-term contract on the front end and we were able to try it and see if we liked it. If not, then we could go other ways instead of being locked into a long three-year contract. That was a real big selling point for us.”

“Once we started using Trucker Tools’ tracking, we found that it has tremendous value,” Swanfeld shared. “I’m very confident when we’re updating customers now on where their freight is. I’m no longer guessing whether the driver made it to the receiver or not. When the app is deployed right away, you can tell that the driver has the app and if the driver’s tracking. You can tell if it’s a valid phone number, which is important today with scammers and double brokers and the use of fraudulent phone numbers.”

“One of the things I found out from talking to drivers is they enjoy the Trucker Tools app’s features,” Swanfeld said. “We’ve seen a huge increase in compliance with our carriers and I’ve also seen a huge increase in the buy-in from staff. Our scorecards also have increased and we’ve seen a huge spike in our percentage increase on compliance with our customers in that area. It’s a time saver for us because we’re not having to make a bunch of phone, which allows us to be able to pursue other freight opportunities. We’ve been tracking with Trucker Tools for a little over two months and we’re just under 90 percent compliance right now. That number at 90 percent I think is very doable for anybody and we’re shooting for higher, for sure.”

Watch the webinar on demand.

Digitize and Scale Your Business with Trucker Tools