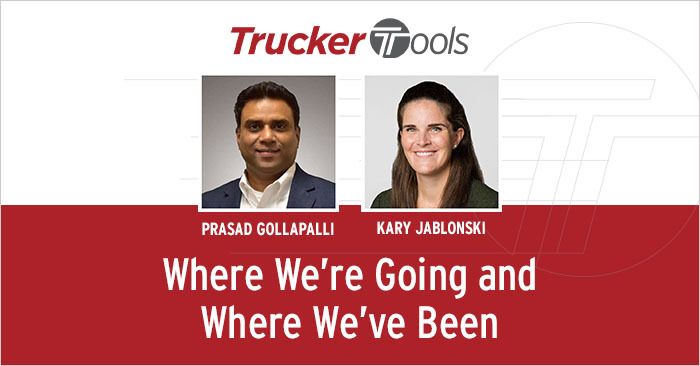 As we announced this week, Prasad Gollapalli, the founder of Trucker Tools, is moving into a new role as a strategic advisor and Chief Customer Officer. Kary Jablonski, who has served as Chief Operating Officer since 2021, is now stepping into the CEO role at Trucker Tools.

We recently caught up with Prasad and Kary to talk with them about how Trucker Tools has evolved over the past 12 years, starting as a small boot-strapped start-up to being the number one downloaded mobile app in transportation and a leader in transportation technology.

Here’s what Prasad and Kary had to say in their own words about this exciting transition and what to expect from Trucker Tools in the future.

“Before Trucker Tools came into existence, small carriers had to log into load boards and then fight for each load, sometimes calling 20 or 30 brokers to negotiate the rate. At the time, I thought of the efficiency small carriers could gain if there was a computer in the truck with the driver. Many big trucking companies were already doing some of this with software, but small carriers didn’t have access to that software to capture these things.

In 2009 as the recession hit, I was a member of Getloaded’s leadership team, which was acquired by DAT. At that time, I was speaking to a bunch of owner operators and one particular conversation stuck with me. He was an owner operator with two kids and a wife at home and was on the road all the time. He’d canceled his membership when we increased the fee to $45. I said to him, ‘If you get one load from us, the subscription will pay for itself.’ In response, he said, ‘That sounds simple to you, but let me walk you through my day.’ He walked me through his day and then said that sometimes he had to choose between putting food on the table for his family and putting fuel in his truck. This was a powerful story and really put things in perspective. These small trucking companies that were creating capacity for us really were the ones struggling the most, yet nobody was trying to make them more efficient or make them profitable. That story stays with me today.

From the beginning, I envisioned us being able to use digital freight matching to proactively feed freight to the small carrier and owner operator based on their preferences, which would give them a leg up. I brought on Susan Cordle as controller and as employee number one at Trucker Tools. We recognized early on the value there would be in aggregating owner operator and small carrier capacity. The challenge from there was how to get that small carrier segment started with Trucker Tools, so we decided to begin by helping them with fuel prices. I understand technology, but I’m not a software developer. I already knew Murali Yellepeddy (Trucker Tools’ Chief Technology Officer) and I brought him on to build the app. After we launched the first beta version of the Trucker Tools app, I felt like a kid in a candy store as I watched the red dots on the map appear and multiply as truckers and carriers downloaded the app. From there, we added the Truck Stop Guide, real-time visibility in 2013, and then eventually in 2016 we finally added digital freight matching to bring brokers to the table and we have never looked back since. As Trucker Tools evolved over the years, our customers served as our advocates on our journey and helped us build a better product. In 2021, I sold the company to ASG to help accelerate our mission of transforming the transportation industry and strengthening the supply chain with real-time data.

In my new role as Trucker Tools’ Chief Customer Officer, I’ll primarily be advising the leadership team and staying close to our customers. I’ve spent almost 25 years in a management role and now I’m taking a little bit of a step back. Personally, the timing is very good for me because my wife and I welcomed a new baby daughter, Hamsika, late last year. She’s six months old now and now I can have some focus on my personal life.

As we look to the future, I am excited that Kary will be at the helm of the team and am confident in her leadership. She has been leading our operations teams over the last several months and built phenomenal relationships with both our employees and customers.

I want to say thank you from the bottom of my heart to all of the people who have supported me and Trucker Tools, showing incredible loyalty and sticking with me through thick and thin.

Kary: “Prasad and Murali have had incredible vision about what the transportation industry has needed as it began its digital transformation. They have been true pioneers in this space, building the number one downloaded app in the transportation industry and introducing the industry’s first automated load booking tool, Book It Now®. I’m deeply honored to lead our team and step into the CEO role and I am grateful to Prasad for his partnership.

As CEO, my primary focus will be on our people. We are building a world-class team that believes deeply in our mission and lives our core values every day. Our people are what make us successful and my role is to set our vision and unlock opportunity for them to take Trucker Tools far beyond where we are today.

I’ve loved getting to know so many of our customers over the last six months.. Understanding them drives everything we do. Trucker Tools is built on a unique combination of incredible relationships with brokers and carriers and cutting edge technology. We’re going to continue building the best platform to help brokers scale their businesses through strong carrier relationships. Over the coming months, we’ll double down on being the most complete visibility provider in the market while releasing several new features to drive digital transaction growth through our Smart Capacity platform. All the while, we remain committed to developing and providing owner operators and carriers with the most critical tools for life on the road.

I’m excited that over the next several months, I’ll be meeting with many of our customers in person at TIA in San Diego, at the FreightWaves Future of Supply Chain trade show in Arkansas, and in offices in Chicago and beyond. We are excited to continue partnering with you to transform the future of transportation.”