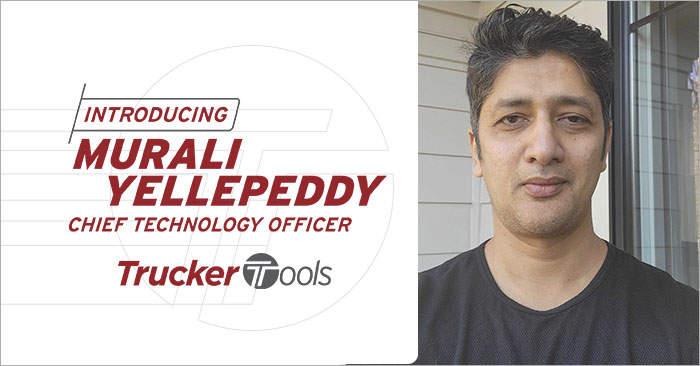 We hope you’re enjoying getting to know the talented members of the Trucker Tools team! In this newest blog in this ongoing employee series, we introduce you to Trucker Tools’ Chief Technology Officer, Murali Yellepeddy. Murali has and continues to play a crucial role in Trucker Tools’ trajectory, as he has been with Trucker Tools from the very beginning. Murali was the first person to join Trucker Tools and he eventually became a co-owner of the company before it was acquired by ASG. Before he started Trucker Tools with Prasad, Murali was a senior software engineer for the Chicago Board Options Exchange and technical manager for BlackBoard. Outside of work, Murali loves spending time with his wife and his children, who are 11 and 13 years old.

Pets: Saber (as in light saber), a 90 lb. Husky/Lab mix who wants to play all the time

What You May Not Know About Murali: When he lived in Chicago, he home brewed IPAs in his bathtub several times each year.

What Murali Does at Trucker Tools

“I’m the chief technology officer at Trucker Tools,” Murali said. “I’m the head of engineering and the product. I set the road map for the product by talking to customers and oversee the implementation of the next set of innovative features for the platform.”

How Murali Got His Start with Trucker Tools

“Prasad and I actually went to high school together,” Murali shared. “I hadn’t seen him in 16 or 17 years and ran into him one day at a Gold’s Gym. He was on the treadmill and we started talking and that’s how it happened. When Prasad first started the company in 2009, I worked as a contractor for about six months and then joined Prasad full time after those six months.”

Industry Technological Developments That Murali Is Excited About

“This week, the White House released a discovery memo saying, ‘Hey, we need more open exchange of data’ and that’s going to solve a whole bunch of problems,’” Murali said. “I think that is a step in the right direction. This industry suffers from lack of trust. Confidentiality of data is a big concern for a good reason. Lot of businesses have built their relationships and secret sauces over many years and they are afraid that by sharing data they may share a bit too much of that. Technology will have to solve this concern and provide an environment where the players feel confident in sharing information without losing their value proposition. I truly think technology can solve that. Having timely accurate data is key in taking the next steps in this digital transformation and solving supply chain issues.”

“One thing that Prasad and I have in common is our ability to focus on the problem in front of us,” Murali said. “So when there is a problem in front of us, we are completely focused on that and everything else becomes secondary, which helped us bring very strong solutions to the industry. As Trucker Tools started growing and adding more people, it was fairly clear to us that we needed to have a culture where all of us are in it together. We always know where the goalpost is, so there’s absolute alignment and clear communication as to where we are going as a group and as a company. That was one of the most critical things that I realized very early in the company. A strong team is such a critical part of the whole solution. We’ve made great efforts to build a really coherent, super-aligned team.”

What Murali Likes To Do Outside of Work

“This might be boring, but I’m a super family person,” said Murali. “As soon as my day ends, my day with the kids and the family starts immediately. There are absolutely no gaps. I’m either taking them to a chess tournament or a basketball tournament. Both kids are into AAU basketball, too. I’m one of those dads who’s analyzing every move and sometimes they hate me doing that, but I do anyway because I feel like I’m partially on the court while my kids are playing. When we started Trucker Tools, I’d just had my firstborn. She was one year old. Prasad always tells me that he can tell how old Trucker Tools is just by looking at my daughter.”

“I want to take my kids to Masai Mara in Tanzania and Kenya for a safari,” Murali shared. “I want to go to a place called Ladakh in Northern India with my wife. I’ve heard great stories from my friends about it. It’s just a beautiful place high up in the Himalayas. It’s one of those places that’s difficult to access. It’s a trek to get there. It’s beautiful.”

To get to know another key member of the Trucker Tools team, be sure to check out our previous employee spotlight, “Say Hello to Ricky Duddy, Trucker Tools’ Enterprise Sales Manager.”