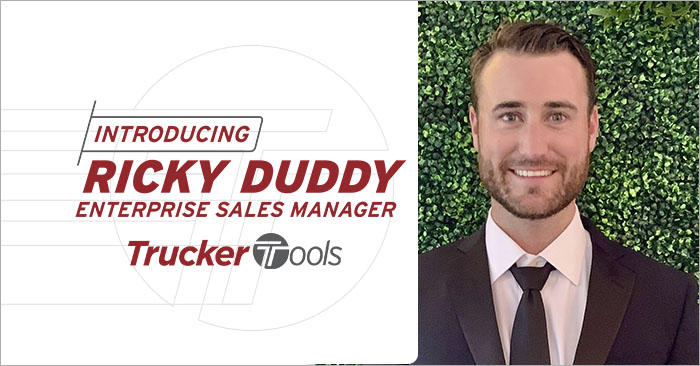 In this blog series, we’re introducing you to members of the Trucker Tools team. They’re the fantastic folks behind the scenes making Trucker Tools the successful and people-focused company that it is today. In this blog, you’ll get to know Ricky Duddy, Trucker Tools’ Enterprise Sales Manager. Ricky joined the Trucker Tools team seven months ago following stints working for two logistics start-ups and two fortune 100 companies. When he’s not at work, Ricky loves coaching college hockey, playing golf, getting out on the boat or going to the beach.

Keep reading to learn more about Ricky Duddy, why he believes in what he sells and why July 4th is his favorite holiday.

What You May Not Know About Ricky: He’s a Millennial snowbird, splitting his time between Tampa, Fla., and Plymouth, Mass.

Bucket List: To swim with orca whales and play 18 holes at every TPC championship course in the United States

Ricky’s Ideal Day at Work: Starts with a lead and ends with closing a new client

“I work with our larger prospective clients to help them understand why Trucker Tools would be a great partner for them,” said Ricky. “Essentially, my job is to pitch them, tell them why they need Trucker Tools’ Smart Capacity and make it hurt a little so that they really know that they need to go with us. I work on any pain points they have and dig into their operations and find out what could be done more efficiently. From there, we negotiate pricing and get agreements signed. Then they go from me over to our onboarding and customer success team.”

What Ricky Likes About His Work at Trucker Tools

“First of all, it’s hard to sell something you don’t believe in, so I’d say one of my favorite things here is just having the backbone of all the other teams across every other department,” Ricky said. “Once a client leaves sales, everybody else has to deliver, which makes selling the solution really easy because I know I can count on the rest of the team. The other thing I liked about Trucker Tools was when I was in the interview process and I’ve seen it a lot since I’ve been hired is the emphasis on young leadership. It’s clear that Trucker Tools’ develops leaders internally and then Prasad (Trucker Tools’ CEO and Founder), Murali (Trucker Tools’ Chief Technology Officer), and ASG over the last year have really plucked some very talented business leaders out of graduate school and from within the industry to come here. It feels like anyone with any ambition can grow their career here. This is a great place.”

How Trucker Tools Is Different From Other Places Ricky Has Worked

“I’ve experienced both sides of the coin in terms of working with start-ups and Fortune 100 companies, but Trucker Tools is a happy medium,” Ricky said. “We have capital, but our team runs like a startup where you can have more influence, make changes and have a bigger impact on clients and the business. One of the things I get to do is to go to events and meet who else is in the industry. You find out who makes up these trucking companies, who works for certain freight brokers, who the other software companies are, and get to know the brokers and the 3PLs that we’re partnering with. Honestly, it’s one of the most fun groups of people I’ve ever been a part of. I mean, they work hard, but they play hard, so it’s really amazing to be in this.”

What Ricky Likes Doing Outside of Work

“I’ve coached college hockey for five years,” shared Ricky. “I coached for four years at the University of Tampa and then one year at Bridgewater State College. I’ve taken a break from it for about the last two years. I actually went back to grad school to get an MBA, so it was just too much time coaching hockey, but I’d love to get back into it soon. Other than that, I love to play golf and any days you can get out on the boat or go to the beach. I also just love spending quality time with friends and family.”

What Ricky Is Passionate About

“For some reason I love killer whales,” said Ricky. “I follow Instagram pages on them. I’m a big supporter of getting them out of tanks across the world because it’s just so sad to see an animal that’s so smart and so social, but they’re stuck in tanks and some of them are alone. There’s this one named Kiska up in Toronto and she’s been in a tank by herself and she’s had five babies that have all died. They’ve taken away other social interaction from her and there’s even footage of her banging her head against the wall because she’s under so much stress. I can’t really help too much because I’m working full time down here in Florida. I do make donations to some of the charities and societies that help preserve them and save them, but hopefully someday I’ll have some more time to actually get out to Seattle or Vancouver and do some more hands-on stuff.

If you see them in the wild, they’re absolutely incredible.”

To get to know another key member of the Trucker Tools team, Meet Tracy Neill, Trucker Tools’ Director of Marketing.