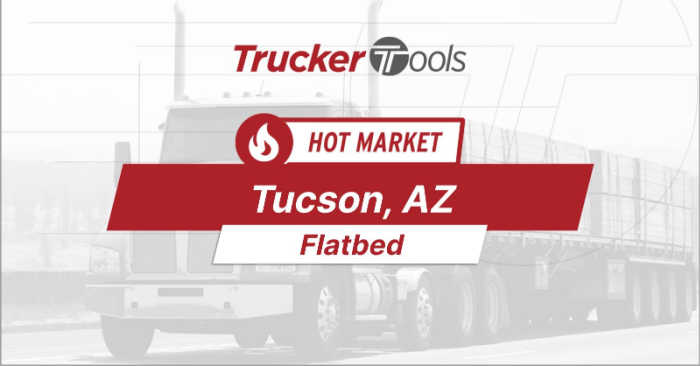 Today’s Trucker Tools Market Index shows that demand for flatbed capacity in several Midwest and Plains markets will be high in the next five to seven days, while Tucson, Ariz., will continue to be a hot spot for reefer in the coming week. You also can expect rates for the Southwestern, Ontario, van market and Mobile, Ala., power only market to heavily favor truckers and carriers this week. At the national level, long-haul outbound tender rejections, which measure overall demand for trucks, are down since early January, yet long-haul volumes remain relatively high. An ice storm is predicted to hit several states over the next two days, which is expected to make driving conditions extremely dangerous. Please stay safe out there!

Where Demand Will Be High

Where Demand Will Be Low

Thanks to our partnership with FreightWaves, we also are providing you with insights on specific lanes. In today’s SONAR Daily Watch, FreightWaves is advising truckers and carriers who typically run Harrisburg to Chicago to expect time-sensitive loads to become available this week, as there is an excess of intermodal capacity available in this lane. As the Midwest preps for a major cold front, you can expect that reefer capacity will be in demand for the Milwaukee to Indianapolis lane. FreightWaves recommends that you divert your available capacity to this lane’s spot market to take advantage of this demand. Spot market rates in the Los Angeles to Elizabeth, N.J., lane are trending higher than contracted rates, so if you have a choice, be sure to target the spot market for this lane, as well.