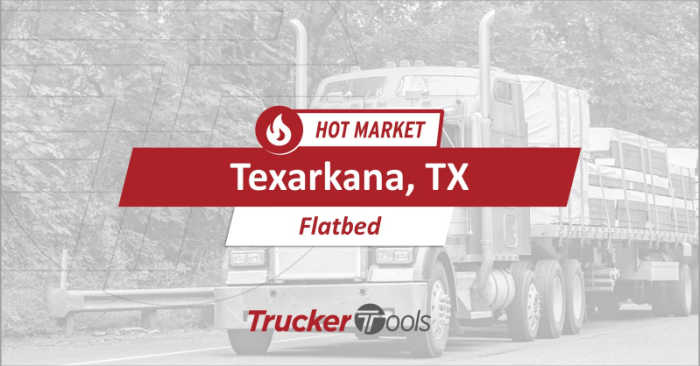 Happy Friday! In your Friday edition of “Where’s the Freight?” you’ll see that three of the five hottest markets in the next week will be flatbed markets, reflecting a nation-wide increase in demand for flatbed capacity. Construction and manufacturing are driving the increase in demand and rates for flatbed capacity. You’ll also find that Little Rock, Ark., is making its first appearance in “Where’s the Freight?” as one of the areas where demand for flatbed will be rising in the next five to seven days. Several markets in Texas are projected to be hot for this week for truckers and carriers, as well, as the state recovers from recent winter storms that left millions without power and water, and caused multiple multi-car/truck accidents. We’re wishing all of you in Texas a speedy recovery and sunny skies.

Where Demand for Trucks Is High, Rising

Where Demand for Trucks Is Low, Falling

Trucker Tools is partnering with FreightWaves to help you identify profitable lanes for the coming week. In today’s Daily Outlook, FreightWaves reports that tightening capacity is driving spot rates up for Jacksonville, Allentown, Harrisburg, Elizabeth, Ontario, Dallas and Philadelphia. Imports coming in through the Port of New York/New Jersey have increased and reload opportunities out of Chicago are plentiful, which is why Elizabeth to Chicago is expected to be a profitable lane for truckers and carriers this week. Elizabeth to Charlotte also is expected to be a hot lane for truckers over the next week, as Elizabeth’s outbound tender rejection rate, which measures demand, is at 27 percent, meaning one out of every four loads is being rejected by carriers. It’s recommended that you stay firm on your rates for Kansas City to Fort Worth this week. Why? Outbound freight volumes are up 31 percent week-over-week for Kansas City, which gives drivers and carriers a significant edge. FreightWaves also is reporting that this lane is likely to heat up even more over the next month due to intermodal freight volume arriving from the West Coast.