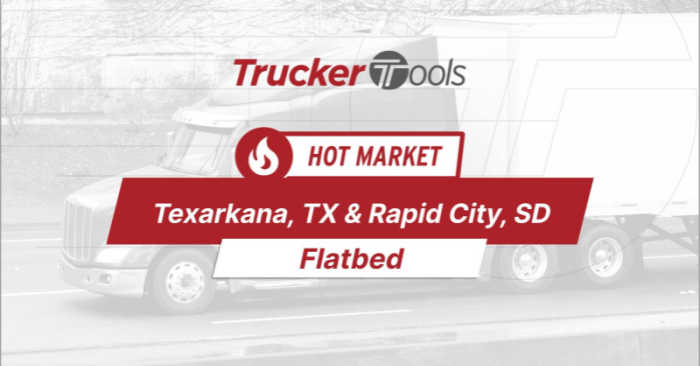 In this Monday edition of “Where’s the Freight?,” Trucker Tools’ free market report for owner operators and carriers, you’ll discover where demand and rates are likely to be high and low this week. In today’s edition of “Where’s the Freight?,” two Texas locations once again snag spots in our Top Five Hottest Markets list, while demand is projected to heat up in two California markets. This week, all of our top five highest demand markets are either power only or flatbed markets, with Texarkana once again projected to be the highest demand/rate flatbed market in North America. You also can expect demand for power only and flatbed capacity to rise in several markets in the Midwest over the next five to seven days. On the flipside, the Wilmington, N.C., power only market is likely to be the coldest (low demand/low rates) market in the country in the coming week.

For more market insights that will help you maximize your profits, scroll down to find out where else demand/rates are likely to be high, low, rising and falling in this Monday edition of “Where’s the Freight?”

Where Demand for Capacity Will Be High or Increasing

Where Demand for Capacity Will Be Low or Decreasing