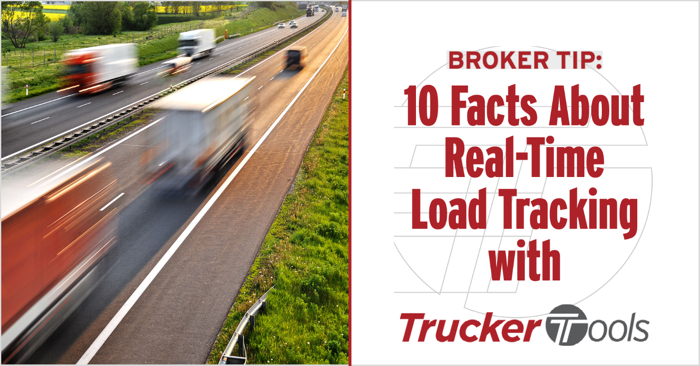 In this ongoing educational blog series, we’ve providing freight brokers like you with real-world tips on how to work more productively and maximize your efficiency. Whether it’s saving time on capacity sourcing or implementing load tracking best practices for exceptional results, we’ve got you covered. This newest blog is focused on Trucker Tools’ real-time visibility platform and companion driver app, which together let you track a load from the time the trucker leaves the loading dock until the freight reaches its final destination. These 10 facts are driver focused and can be used to answer any questions your drivers and carriers may have about Trucker Tools’ real-time visibility technology.

Check out these 10 facts about real-time load tracking with Trucker Tools.

The driver component of our real-time visibility software, the Trucker Tools driver app, is optimized for low data usage. You could run five different load tracks for one to two days and it would require the same amount of data as opening the Facebook app on your smartphone one time.

2. Location Updates Even When Cell Coverage Is Bad

The Trucker Tools driver app is optimized for low battery usage. The application goes “to sleep” in the background and “wakes up” every five to 15 minutes to transmit a location update. Using the app for 48 hours generally will only use 23 percent of the driver’s smartphone battery.

The driver (or broker) can stop tracking at any time once the freight is delivered. The load tracking feature in the driver app will automatically stop tracking 24 hours after the delivery time.

Once the load track has begun, the driver has the option to pause or cancel the track at any time from within the Trucker Tools driver app. When a driver pauses or cancels a load track, the dispatcher automatically is notified.

Unlike some mobile apps that track loads for brokers, the Trucker Tools driver app is free for drivers and carriers. It also includes 20+ other tools and features designed to simplify life on the road for truckers. Drivers can use the app to find the cheapest fuel, parking, weigh scales, truck stops, foods and much more.

Trucker Tools’ driver app and its load-tracking tool are designed for use in the United States and Canada. In fact, we have several Canadian drivers, carriers and brokers currently using our load tracking tech.

Once the driver agrees to start tracking a load, little to no action is required from the driver. This encourages safe driving and minimizes driver distractions.

Once a driver enters the geofenced area around a pickup or drop off point, they can automatically track detention time by tapping on START RECORDING DWELL TIME in the Trucker Tools app.