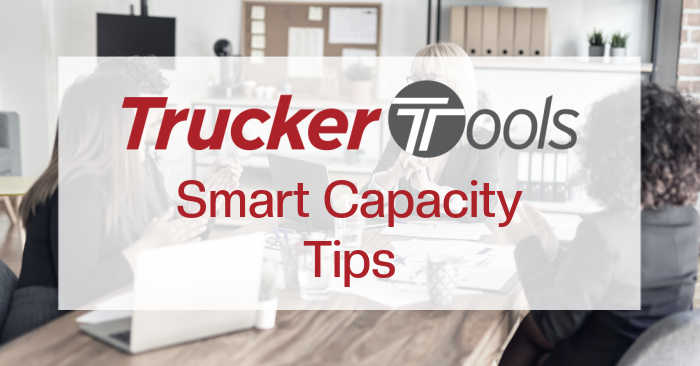 This ongoing Broker Tip blog series is giving freight brokers like you the tools you need to be more effective in your daily work. Our tips help you source and manage capacity faster, streamline your communications with carriers and drivers, build a strong carrier network and increase efficiency. This blog is dedicated to real-time load tracking and how to achieve the best results with Trucker Tools’ real-time visibility software platform. These best practices were created by Trucker Tools’ onboarding and implementation team and are based on real-world use of our best in class load tracking platform. These best practices encourage active driver participation in your load tracking process, setting you up for future success.

The first load tracking best practice is to be transparent with your expectations with drivers around load tracking. Explain to carriers and drivers that you use Trucker Tools for digital load tracking and that tracking using Trucker Tools is required on every load they move for you. If you need help with having those conversations with carriers and drivers, contact your Customer Success Manager. Your Custom Success Manager can provide you with strategies that have worked well with other freight brokers and their drivers/carriers. You also may want to reach out to your Customer Success Manager to see if you qualify for a co-marketing campaign to drive higher driver engagement and participation.

Unlike many mobile apps that are used to digitally track loads, Trucker Tools’ driver app, the driver component of our real-time visibility platform, includes 17+ features beyond tracking that help drivers. The Trucker Tools driver app puts all the features and tools a driver needs in one, easy to use mobile app. If a driver is hesitant to use Trucker Tools’ mobile app for tracking, let them know that it’s the number one downloaded app in the industry because it does much more than track broker loads. In addition to tracking broker loads, the mobile app provides drivers with real-time info on the cheapest fuel, best routes, and on nearby weigh scales, truck stops, rest areas, parking, backhauls, rates and more.

3. Show Me the Money

When a driver finishes digitally tracking a load with the Trucker Tools driver app, you can automatically prompt the driver to upload BoL and PoD documents right then and there via the app. To submit BoL and PoD docs via the mobile app, the driver must take a live photo within the app to upload and send to you, thereby reducing the chances of fraudulent submissions. Most importantly, encouraging driver uploads of documents at the close of a load track helps drivers and carriers get paid faster, which can’t help but encourage them to run with you again.

Some freight brokers and 3PLs using Trucker Tools’ real-time visibility platform don’t release the details on a load to the driver or carrier until the driver downloads the Trucker Tools app and taps on Agree to agree to load tracking. Depending on your circumstances, you may want to withhold details such as the pickup number or purchase number until the driver has done both of these things. This strategy ensures that the driver and carrier agree to tracking with Trucker Tools before they move your load.