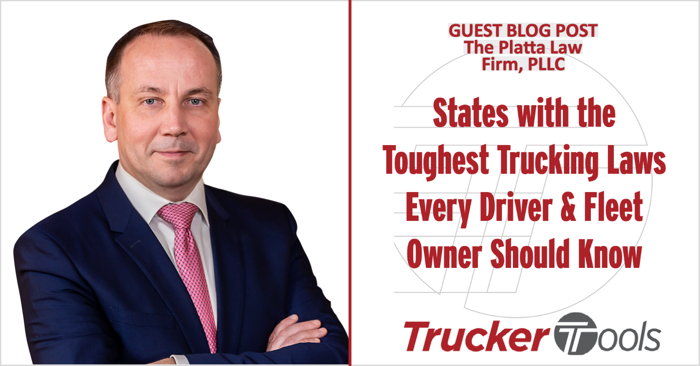 When it comes to truck drivers and fleet owners, not all states are equally accommodating. Due to a variety of strict and prohibitive laws, some states certainly make it more challenging for those in the trucking industry to do business within their borders. What may work well for truckers in one state can be problematic in another.

Like most any other business in the U.S., the trucking industry is subject to numerous rules and regulations levied by state and federal agencies. And those placed upon truckers can be particularly stringent since the health and safety of the public are directly impacted by the actions of drivers and the massive vehicles they’re operating. For this reason alone, it’s critical that truckers follow the laws put in place to protect pedestrians and other drivers who share the road.

When it comes to providing guidance and direction for the trucking industry, it’s the Federal Motor Carrier Safety Administration (FMCSA) that has taken the helm. A division of the U.S. Department of Transportation, the FMCSA imposes nationwide regulations on a gamut of trucking related issues, such as proper labeling and delivery of hazardous materials, determining the number of hours drivers can operate their trucks within a certain timeframe, and imposing weight and size restrictions for all commercial vehicles operating on America’s streets and highways.

It should be noted that commercial vehicles encompass more than just big rigs. Virtually, any truck, with a Gross Vehicle Weight Rating over 10,000 pounds that is used for business purposes is usually classified as a commercial vehicle and consequently subject to a host of applicable state and federal trucking laws.

While federal trucking regulations are consistent throughout the country, state regulations are not nearly as uniform. Once crossing state lines, the rules of the road can become dramatically different. Not adhering to a state’s commercial vehicle protocols can lead to hefty penalties, especially when violations contribute to the cause of an accident. To avoid shelling out substantial sums in fines, truck drivers and fleet owners conducting interstate commerce should be familiar with the different laws and regulations being enforced within each state’s borders. Below are some examples of more severe trucking laws imposed by states across the nation.

Hands down, the Golden State enforces the strictest emission regulations in the country. In its ongoing efforts to improve air quality throughout the state, California has implemented a plethora of laws over the years to reduce harmful vehicle emissions. It’s most recent truck and bus regulation requires heavy-duty diesel vehicles that operate within the state to reduce toxic air contaminants (TACs) emissions from their exhaust. By January 1, 2023, nearly all trucks and buses will be required to have 2010 or newer model year engines to reduce particulate matter and oxides of nitrogen emissions. Only vehicles compliant with this regulation will be registered by the California DMV.

Want to cruise down the highway in the fast lane? If you’re driving a truck with a gross weight over 10,000 pounds, or combination of vehicle and trailer or semitrailer on a Michigan highway, you can forget about it. Vehicles that fall under these classifications must use the two right lanes on highways with three or more lanes, except to turn left or where a special hazard exists. Failure to follow this left lane law could result in a $250 fine.

During the winter months, roads can become especially dangerous. While various states require trucks to use chains for greater traction, Colorado has enacted some of the toughest chain laws in the United States. From Durango to Denver (and beyond), truckers must chain up the four drive tires during dangerous winter driving conditions. Violators can be subject to fines of $500. Moreover, if chain infractions cause a driver’s truck to block the road, the fine is elevated to $1,000.

According to the Federal Motor Carrier Safety Administration, securing freight load while in transit is a must for every trucker in every state. Whether transporting sand, gravel, automobiles, or chickens, the load must always be fully secure. However, some states are a bit more stern when it comes to their tarping requirements, doling out heavier fines and penalties for failing to observe the laws. To maintain compliance, it’s imperative to be aware of the differences in securement rules on the state level.

For instance, truck drivers hauling freight in Washington could be charged with a gross misdemeanor by failing to obey commercial cargo securement laws. Then there’s Maine, a state that relies heavily on lumber transportation. Here truckers must be sure their lumber is properly secured to avoid fines of up to $500 per infraction. However, only natural resources such as firewood, logs, straw and cornstalks are required to be secured. In Pennsylvania, truckers must clean up any spillage that comes from their loads.

Know Where You Stand When You Drive

Being aware and knowledgeable of the unique trucking rules and regulations enforced by each state is vital to the success of all those working in the trucking industry. The above examples illustrate just a smattering of the many unique trucking laws imposed, and the disparities that exist from state to state.

Ultimately, it is the responsibility of both truck drivers and fleet owners to abide by the local, state and federal laws that apply to them. To better identify the unique laws imposed on drivers operating commercial vehicles in specific regions of the country, this list of regulations provided by Federal Motor Carrier Safety Administration can prove extremely helpful.

Slawomir Platta earned his degree from the University of Florida Levin College of Law. He’s been trying truck accidents throughout the Courts of New York for almost 20 years and has been featured as a Super Lawyer consecutively since 2015.