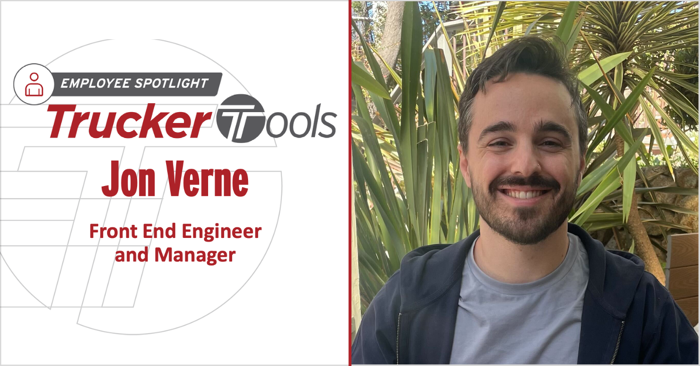 In this ongoing Employee Spotlight blog series, we’re introducing you to the awesome people working behind the scenes here at Trucker Tools. This latest blog in the series is all about Jon Verne, Trucker Tools’ Front End Engineer and Manager. Jon joined Trucker Tools in January of 2020 and currently leads the engineering team that builds and maintains all customer-facing websites, including our Smart Capacity platform and carrier software platform. Before joining our team, Jon worked for the Department of Defense as a software engineer. When he’s not at work, Jon enjoys spending time at home in San Diego scuba diving, gaming and surfing.

What Folks at Work May Not Know About Jon: He’s covered in tattoos

What Jon Does at Trucker Tools

“I’m the front end engineer or the front end manager,” Jon said. “I’m in charge of managing all of our websites and all of the infrastructure that hosts them, as well as building everything the user can see and interact with. That includes Smart Capacity and our carrier software platform. A lot of what I do is building new features and upgrading all of our infrastructure, as well as making sure it’s running smoothly. I also manage the other members on my team.”

“I was a software engineer for the U.S. Department of Defense before I came to Trucker Tools,” Jon shared. “It was a big change and I was in government work all throughout my career until I came to this job. A lot of the stuff I did there I can’t talk about, but it was kind of a similar field. When I applied to work at Trucker Tools, I was really just looking for a company that was growing and needed someone of my skillset. I also wanted to manage my own team, manage products and be in charge of an entire coding infrastructure. I wanted to have that freedom to make decisions. When I was applying to Trucker Tools, the team in general just seemed really nice and easy to work with.”

What Jon Enjoys About Working at Trucker Tools

“I like that it’s like a little family,” Jon said. “Everyone is talkative and wants to know what each of us are doing and how we’re doing. People here want to make sure that we’re enjoying our work and want to help if we need it. There’s always someone that’s willing to help. It’s just really nice. It’s a big difference from Department of Defense work where you can’t really talk to everyone.”

I like that it’s (Trucker Tools) like a little family. Everyone is talkative and wants to know what each of us are doing and how we’re doing. People here want to make sure that we’re enjoying our work and want to help if we need it. There’s always someone that’s willing to help. It’s just really nice.

Jon’s Life Outside of Work

“I had one prior coworker who was an inspiration for me,” Jon shared. “He was a 75 year old man who retired from being a lifelong nurse and decided to take up computer programming. He knew nothing about it, but he taught himself to program and he worked with me at the Department of Defense. He was a great inspiration and mentor for me. He definitely inspired me to always be learning.”

“I want to be able to hold my first born child if I have a child one day,” Jon said. “That’s definitely on my bucket list.”