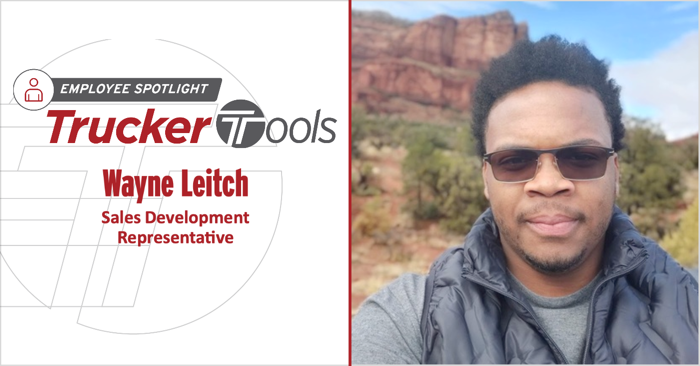 In this ongoing Employee Spotlight blog series, you’re getting to know the hard-working folks here at Trucker Tools. In this newest spotlight, we’re introducing you to Wayne Leitch who joined the Trucker Tools sales team a few months ago. Wayne is a former professional musician who before he came to Trucker Tools was working in transportation telematics sales. When he’s not at work, Wayne loves spending time with his wife, two sons and daughter.

What Wayne Does at Trucker Tools

“I’m a part of a very important vertical in the company,” Wayne said. “I help generate new opportunities for growth in revenue by making cold calls to companies that I’m prospecting, which are outbound. Then on the inbound side, I communicate with prospective customers that come to me through marketing, maybe lost deals or general follow ups perpetuating the pipeline for growth in the sales department.”

“Prior to this, I was working with a tech company in the telematics industry,” Wayne shared. “We sold dash cameras to carrier companies. I started my career off in sales and then jumped off and did something in the industrial world. I ultimately decided to come back into sales to pursue my initial dream and here I am.”

What Wayne Likes About Working at Trucker Tools

“I really love the synchronicity of the Trucker Tools team,” Wayne said. “I can go to anyone with any issues or any questions that I have and get fast and knowledgeable answers. My direct report, Chuck, is fantastic. He’s been phenomenal. I don’t think there’s ever been a time where I asked him a question that he did not have the answer to. I love that you can go to anyone on the team for anything at any time and everyone is very knowledgeable.”

“I am a big foodie and I love trying new foods and experiencing new and different cultures through food,” said Wayne. “I love Asian food, especially pho, a Vietnamese noodle soup that’s delicious. I also love traveling with my family. We try to spend as much time out of the house to stay active because we’re pretty big family. My wife and I have two boys and one girl. We love trying different foods and restaurants. My favorite Houston restaurants are Mai Thai, a Vietnamese restaurant, and Anothai, a Thai restaurant that is fantastic. They’re phenomenal. I had an interesting experience there. I wanted to try their hot sauce and they have five different levels of spice. I chose “Thailand hot” and the server asked me if I was sure I could handle it. I literally cried through the entire meal it was so hot. I no longer had sinus issues from that day forward. I never tried it again after that.”

“David Goggins is an inspiration to me,” Wayne said. He’s one of the strongest men on earth. His story is so captivating and inspiring. He’s living proof that excuses only live in your mind and that anything is definitely possible. He ran a marathon with two broken legs, you know, so this guy is beyond human. He went from 450 something pounds and was overweight and he ended up losing all of the weight, joining the military, and running a marathon with two broken legs and a messed up neck. He makes super-human things possible. When I read his story, it made me feel like I have no excuses in life.”

“I was born in South America in Guyana,” Wayne shared. “It’s right above Brazil next to Venezuela on the northern coast. It’s the only English speaking country in South America. It’s a very diverse country with great, great food and eco-tourism is big there. The people there are just wonderful.”