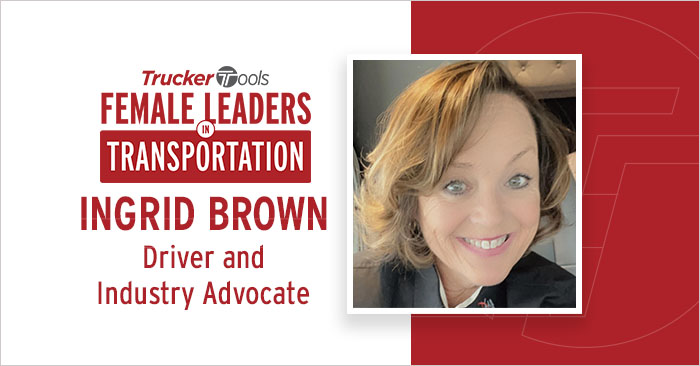 All throughout the month of March in celebration of Women’s History Month, we’re honoring female leaders from across the transportation industry, including company drivers, owner operators, freight brokers and logistics consultants. In this second blog in this series, you’ll meet Ingrid Brown. Ingrid has been a commercial driver for 40+ years and for many of those years has been a tireless advocate for the trucking community. Her advocacy includes working with the Women in Trucking Association and on several of the FMCSA’s road safety campaigns, as well as promoting general driver awareness and safety. After running as an independent owner operator for many years, Ingrid recently transitioned to a company driver role. She also is the current host of the FreightWaves podcast “America on 18 Wheels.”

A Long and Fruitful Journey in Trucking

Ingrid comes from a trucking family. Her grandfather was a trucker who started driving in 1940 hauling produce from the Carolinas to Pompano Beach, Fla. Ingrid’s father and uncle started a road construction company in 1947 and she learned to drive equipment with them as a teenager. When Ingrid turned 18, she got her first truck and started her trucking career. Though Ingrid has worked as a driver for several companies, she has spent bulk of her trucking career driving as an independent owner operator pulling reefer. When she turned 50, Ingrid came off the road for seven months with the intention of retiring from trucking and began working for an engineering firm in Dallas building roads. Eventually, Ingrid came back to trucking and started driving again, doing what she loves.

“If I hadn’t come into trucking, I would have never had the friendships, extended family, or the acquaintances I have, and I wouldn’t have gotten to see the cultures across the country,” said Ingrid. “It’s unreal the things I’ve seen in 48 states and Canada over my career. That’s what I just thrive on. I love the people in this country and I love the people in the industry and all the people out of the industry amounts to just as many in the industry. I’ve gotten to see all of these little towns tucked away that are kind of like my town, Boone, N.C., up on top of the Blue Ridge Mountains. The money has been great — don’t get me wrong there, but it never has been about money at all with me. Most people tell me that’s crazy, but it’s not. The money has been there as long as I’ve done what I do and work the way I chose to work. I got it all in one package and I am one blessed woman today.”

Now at age 60, Ingrid’s path in trucking has taken another turn. When she turned 60, Ingrid knew she wanted to slow down a bit, so she took a company driver position with an Iowa-based carrier, Friday Trucking, running reefer. Ingrid also has been the host of FreightWaves’ “America on 18 Wheels” podcast since December and later this year will be working with FreightWaves’ Tim Dooner on “Back the Truck Up,” a FreightWaves TV show that will be an extension of the “What the Truck?!” podcast.

Women in Trucking: Making Their Mark

“Yes, we have actually made a mark,” said Ingrid. “We’re here. Seeing more women being out here has been exciting and it’s something that we need to see more of. I always say that there’s nothing that we do as truckers that anybody that’s not driver and not been in the industry can’t do. I don’t care if you’re a single mother, an empty-nester, a widow, retired or just getting out of high school. It does not matter. A steering wheel doesn’t know the gender of the person holding it. This industry is one you can enter at retirement. It’s one you can start out in at 18 or 21 years and be paid equally. There’s a peacefulness to it, seeing women out here. It’s a great thing to see.”

Giving Back to an Industry She Loves

Ingrid has received several national awards and appointments for her advocacy work including being chosen as a FMCSA Voice of Safety for the Our Roads Our Safety campaign, a member of the NASTC America’s Road Team, the NASTC Woman Driver of the Year and a TA/Petro Citizen Driver Honoree. Ingrid also has a Petro station in Oklahoma City named after her and most recently was among three women nominated for the Women in Trucking Association’s 2021 Driver of the Year Award.

“Sometimes I look at the newspaper articles written about me and think, ‘How in the world did I get here?’” Ingrid said. “It’s just nuts because I don’t do anything different than anybody. I’m a driver. Anybody can do what I do. You just have to go do it. I can’t explain to you how all these amazing things have happened in my life. Everyone that came before me has been a mentor to me. I’ve worked with Ellen (Voie) from Women in Trucking since the early 2000s and she’s fantastic. There are so many and every single one of them has touched my life. I can’t say thank you enough and it has made me want to give that back and I guess that’s why I try to do what I do. I don’t get paid for my advocacy work, but I do it to pass it forward. No one asked me to pay them anything to teach me, mentor me, guide me, push me, pick me up, brush me off, put me on my feet and push me off again. Nobody asked me for a thing in return. Not one person. If I can’t give back what I receive, I don’t want to do it.”

Be sure to view the first blog in this series, “Female Leaders in Transportation: Independent Owner Operator Jess Graham.”