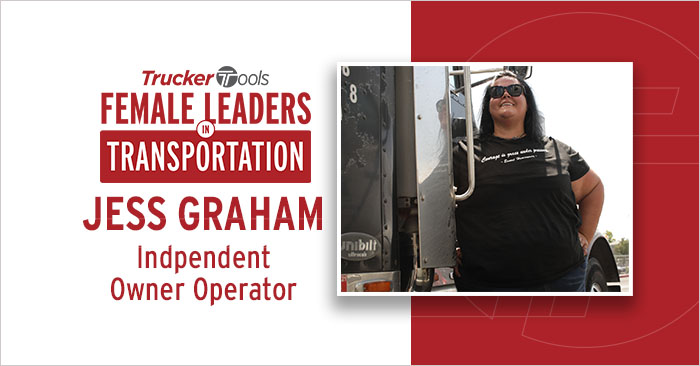 All throughout the month of March in celebration of Women’s History Month, we’re highlighting female leaders from across the transportation industry. For this first blog in our Female Leaders in Transportation blog series, we’re shining a spotlight on Jess Graham, an independent owner operator based out of Atlanta. Jess first got into the trucking industry 10 years ago when she trying to escape an abusive relationship and was looking for a career that would support her and her daughter.

“I had been working in a taxi and sedan service in Metro Detroit at the time and all of the driving jobs that I looked at said I needed a Class A CDL,” said Jess. “I think I decided on a Thursday that I was going to get a CDL and by Sunday of that week, I was in a training program with a mega carrier. Then, eight or nine weeks after that, I was home picking up my 10-year old daughter and taking her on the truck with me.”

Read on to learn more about Jess’ journey in trucking and how the support of the Real Women in Trucking group has influenced where she is today.

Back in 2012, Jess was trying to find a way to get away from her daughter’s father while still being able to financially support herself and her daughter. After earning her CDL, Jess started doing OTR hauls as a company driver. She would often be out on the road for six or eight weeks at a time, and her longest stint without going home was six months. Jess took her daughter with her on the truck, homeschooling her along the way, doing spelling tests and math problems with a dry erase marker on the truck’s windshield. She also leaned on the support provided by her sisters and grandma during this time period. In 2019, Jess left her company driver position because she was being bullied by another woman in the industry. A friend of Jess’ helped her buy an older truck and became a partner in her new owner operator business.

“Being an owner operator was terrifying in the beginning,” Jess shared. “I was just getting situated, just getting running and then the pandemic happened and rates went haywire and the bottom fell out of the market. My saving grace was that I paid cash for my truck and trailer, so I didn’t have any payments and wasn’t compelled to accept rates at 58 cents/mile, which is a third of what my average operating cost is. I had the freedom to be able to park my truck for a little bit and wait for the market to rebound. I didn’t come out of the house until rates stabilized at around $1.70/mile. I was down for about six weeks and I just took that time to restore my old truck with my mechanic. When the rates did rebound, I was ready to roll.”

As an owner operator today, Jess says she has a much better work/life balance and only has to work about 40 weeks out of the year. She told us she loves the freedom and flexibility of being an owner operator.

“People get into trucking because they’re usually on their last leg and this is their last shot at building their families up and changing their life without a massive expenditure,” Jess said. “The average trucking school tuition is $6,000 and that’s doable, especially if you can qualify for federal student loans. With just a couple of thousand dollars and a few weeks, you actually have a shot at a career. I don’t think it’s just a license to drive a truck. I think it’s a license to print money. As long as you guard your CDL, you will be able to always have a job.”

“I don’t think I would be where I’m at without Real Women in Trucking,” Jess said. “I had tried to speak up, but my voice was stifled and yet here’s this group of women that doesn’t let themselves get pushed around. I found my crew, my group, and I think everybody has to find where they belong and I feel like I belong at Real Women in Trucking. They make me a better person and hopefully I contribute to the organization. They stood by me when I was struggling. They encouraged me and helped me to find my niche and anytime I had any question about anything, I could reach out to those women and rely on their experience and expertise. I still do. She Trucking also encourages sharing useful information from seasoned drivers. I like knowing that there’s a place that drivers have a voice and I think that’s one of the reasons why I wanted to be involved. It’s not all office people. That’s nothing against office people, but I think to truly understand the struggle you have when you’re out here on the road, it really does take another driver.”

Find out How Blackburn Energy Is Making the Trucking Industry Greener from the Ground Up.

Avoid Death by Excel: How Trucker Tools Can Automate Broker and 3PL Operations of All Sizes