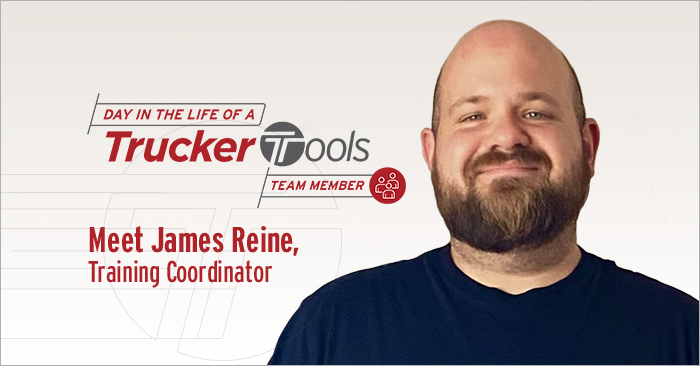 This new blog series is highlighting all the good work that the folks working behind the scenes at Trucker Tools do each and every day. For this second blog in the series, we interviewed James Reine, who joined the Trucker Tools team in February as a customer success manager and just recently became the company’s new training coordinator. James is known for his love of helping people and for being approachable and friendly. Before joining Trucker Tools, James spent eight years working in logistics in both customer and carrier sales. James has a knack for taking on complex subjects and making them simple. Outside of work, James is a church pastor with a passion for music.

Hometown: New Orleans (the Bayou side)

What James does at Trucker Tools:

“I am the training coordinator, so I oversee product training for all new customers and offer ongoing training for existing customers on each of our products. Eventually I’ll start overseeing internal training as well, including continuing education inside the company. I started in this role in August. It’s a brand new position. I was originally hired as a customer success manager.”

What James Likes About Working at Trucker Tools: “

I’m glad this position opened up because I’ve always really enjoyed helping people and making complex things simpler — I enjoy that with just about any role I’m in. With the training coordinator position, the number one function is taking complex things and making them simple, and just being of help to people. I also have input into fleshing out the training coordinator position and figuring out how it can be used within the company.

I really do like communicating with those customers who either have not used our product before or have been dormant in many ways. Certain customer teams get referred to me when a success manager recommends additional training. I really enjoy walking customers through that lightbulb kind of moment when they have a new understanding of our platform and what it can do.”

What James Says Differentiates Trucker Tools from Other Companies:

“This isn’t just a pat answer. I really do feel like Trucker Tools goes above and beyond in wanting and valuing input from all team members. I just don’t see that as being a trend in a lot of other companies. At Trucker Tools — and this leads me to like working for this company — your individuality is valued. That teamwork aspect is, as well. We value everyone’s input. We value you as a person and I don’t think that’s really a common thread in a lot of workplaces.”

“I think for me it’s this mentality that no one ever thinks, ‘That’s not in my job description, therefore I don’t do it.’ No one passes the buck and says, ‘Oh, it’s not my job.’ Everyone kind of says that if they can help or have insight, they’ll share it. Also, whenever new people come onto the team, they share who they are personally before they share who they are professionally. That simple step to me shows one of the company’s values. If you say, ‘We value you as a person,’ you have to back that up and that is one simple way to back that up. We genuinely do care about you as a person.”

How Trucker Tools Pushes James Outside His Comfort Zone:

“I’ve always been a very independent worker and just naturally I want to solve the problem myself. Trucker Tools does give me that space if that’s what I want to keep doing, but at the same time, working here with the rest of the team and how supportive and teamwork-driven it is has almost forced me out that comfort zone of just relying only on my own knowledge and my own abilities. Even working in churches didn’t pull this out of me. In working at Trucker Tools, I’ve learned to include others, to get help and support from the team, and collaborate more. That’s brought me out of that comfort zone. I want to be able to do everything and to have that knowledge, but there are some things that I don’t know and it’s OK to ask questions. At Trucker Tools, they want you to ask questions.”

“I recently worked with a customer whose staff members weren’t getting as much as they could from our load tracking platform and digital freight matching platform. We did an initial training with them and then we kind of thought out of the box a bit on the customer success team and held a Q&A to do more troubleshooting with the customer’s staff. It gave them the chance to ask questions and it really helped them out a lot. As a result, they’ve increased their scores and engagement with the portal. We were able to go beyond a structured training and to give them a tailor-made training.”