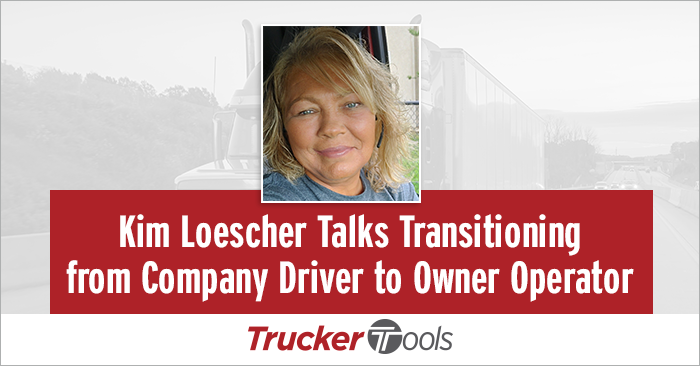 Earlier this month, it was reported that 82,000 motor carriers were granted FMCSA authority between Jan. 1 and Sept. 30, 2021, compared with a total of 59,500 for all of 2020. It’s no secret that over the last 12 to 18 months, many company drivers have made the transition to owner operator in order to take advantage of historically high rates on the spot market. We recently interviewed Kim Loescher, who this year made the transition to owner operator after working for 14+ years as a company driver. In our conversation with Kim, we asked her about her decision-making process for becoming an owner op and what she’s learned in her first year.

Read on to learn more about Kim’s transition from company driver to owner operator.

A Decision Many Years in the Making

According to Kim, she had been contemplating becoming an owner operator for the last six or seven years. Kim told us that one of the reasons she chose to make the switch this year is that she felt like she had the support in place needed to be successful as an owner operator. It also happened that a long-time colleague started his own trucking company and offered her the opportunity to run under his authority. Kim told us that she’d seen her income decrease significantly last year as a company driver due to more multi-stop loads and that she wanted more freedom to choose which loads she hauls, as well.

“It was a very difficult decision and it wasn’t that I just thought about it recently,” Kim said. “I did a lot of research and I have a lot of friends who are owner ops. It was a big change and it’s a lot of responsibility, but I got to thinking sometimes you’ve got to go to grow and I thought, you know what, it’s time for me to do this. Now I’m able to run how I want to run, where I want to run and when I want to run. If I want to work, I work. If I don’t want to work, I don’t, and I’m my own boss. I don’t have my own authority yet, but I do all my own stuff as an owner op.”

From Long-Haul to Short-Haul, From West to East

Kim told us that she’s mostly hauling fresh and frozen food as an owner operator, but that her trailer also has the flexibility to move dry van freight, as well. She said that she’s learned a lot in her first year as an owner op and one thing she didn’t know is that shorter hauls often are better than long hauls.

“As an owner operator, you’ve got to think differently,” Kim said. “More miles means more wear and tear on your truck. So you have to think differently. Do I want the long run? How well is it paying? What’s this going to cost me and what am I going to make on it? I also used to hate running the East Coast. Since I’ve been doing this, I’ve found myself on the East Coast way more than I have in all of my 14 years of driving. The money is out this way.”

Kim told us that she is making very good money as an owner operator, but that what’s most important to her is that she can get home to Ohio every week or even sometimes a few times each week to be with her family, which includes a new grandbaby. Since she became an owner operator, Kim hasn’t gone more than 10 days without going home. She also was able to take a vacation this year. As a breast cancer survivor, it’s also important that Kim is able to get home for doctors’ appointments.

“Believe it or not, it’s easier for me to get home for doctors’ appointments now,” said Kim. “As a company driver, it was hard because I could request to be home at a certain time, but I might not get home for a week after that. Last year after I came back from my breast cancer battle, I hated to take off work for doctor’s appointments because it affected my pay. It’s hard when you’re off chasing that dollar. Now as an owner operator, I’m home so much more. I’m going to my appointments. It’s easier for me. I don’t have to answer to anyone. It’s actually better for me medically. I’m not as stressed as I was as a company driver.” Be sure to check out How Trucker Tools’ Load Search and Book It Now® Benefit Owner Operators and Carriers. To download Trucker Tools’ free mobile app, visit https://www.truckertools.com/carriers/.