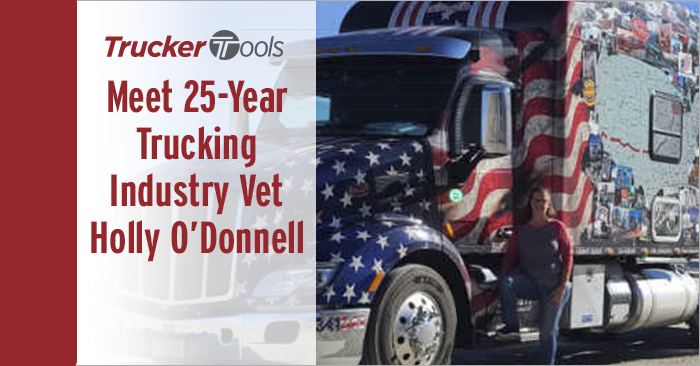 If you’re a regular reader of the Trucker Tools blog, you know that we love talking to truckers and carriers from all over North America. We recently had the pleasure of speaking with Holly O’Donnell, a Tennessee-based owner operator who for the last few years has been team driving DoD freight with her husband, Mark. Holly told us about how she got into trucking by chance and about the different jobs she’s had in industry, as well as some of the challenges that go with pulling specialized freight. Like many of us, Holly has elderly parents who need a high level of care. She recently made the difficult decision to step away from trucking to care for her 93-year old parents, which she also discussed with us.

A 25-Year Career in Trucking

“I kind of fell into trucking by accident, really,” Holly said. “I was off work for just a simple knee surgery and the guy I was dating at the time asked me to jump on the truck with him for a couple of weeks so I did. When I called work to tell them I got my release to come back to work, they told me not to bother because they were closing their doors and that I didn’t have a job anymore. So I stayed on the road with the guy I was dating. After about two months, I told him either to take me home so I can do something or to teach me to drive because I was bored. So he taught me to drive. I never went to trucking school. That was back in 1997.”

Since then, Holly has worked for several trucking companies mostly hauling general commodities. Six years ago, she and her husband Mark started team driving together as company drivers. In 2018, they were recruited to join a new DoD division within Bennett International as owner operators. Holly and Mark made the transition to owner ops and joined Bennett, a decision that Holly said was a good one. According to Holly, hauling ammunition, missiles, firearms and explosives for Bennett has been her best and favorite job in trucking because of the way the company treats truckers and the high pay. She also said that both she and her husband had wanted to join the military but couldn’t, so they appreciate the opportunity to serve the country and military as truckers.

“Hauling explosives and ammunition requires that you get a governmental security clearance and it’s a 125-page application,” said Holly. “They do a background check on your entire life, even before you’re 18. One of the biggest challenges of this work is I drive days and Mark takes the night shift and if we’re sitting in an unsecured lot, he has to sit up front all night and guard the load. That can be very boring. We have a 2018 Peterbilt 120 inch custom sleeper and that can be a challenge with weight on some loads and getting into some of the areas on military bases.”

Holly also told us that she and Mark have to carry a key fob in case of emergencies that is like a panic button. If you push the panic button, within three minutes the government will call to find out what’s happening. Holly and Mark also have a special program on their computer log that they have to log into to let the government know where they are and what they’re doing when they make a stop. Pulling this type of freight for the military requires special hazmat training, a TWIC card and team driving, as well.

Stepping Away from Trucking

“Right now I have to take Holly out of it and let the Lord lead me because I want to turn it over to him and I know he’s going to give me what I want, but I worry about finances,” Holly shared. “Trucking has been my life for so long. I really don’t know a lot of anything different. It’s hard to watch that truck leaving and know I’m not in it, but I have to remember, I’ll be taken care of and it’s okay. I’m doing good right now, but the minute Mark pulls that truck out and I’m not in it, I’m probably going to break down.”

Holly has two businesses that she’ll be running while she cares for her parents. The first is working as an independent consultant for Paparazzi Jewelry. Holly also will be launching a new t-shirt business very soon.

Stay tuned to Trucker Tools’ blog for more of our interview with Holly.