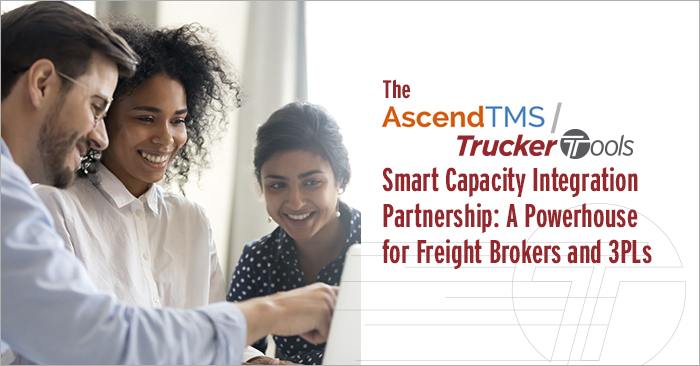 In a recent webinar, Trucker Tools’ V.P. of Partnerships and Strategic Alliances Matt Silver was joined by InMotion Global’s President and C.E.O. Tim Higham to discuss “Embracing a Partnership Approach To Add High-Value Features to Your TMS.” The webinar centered on how Trucker Tools’ Smart Capacity platform integrates with InMotion Global’s AscendTMS, the benefits that the integration partnership provides to freight brokers and 3PLs like you, and where this technology is headed in the future. The two also discussed what to look for in a technology partner, the importance of company culture alignment in tech partnerships and the general state of the transportation industry.

“More brokers today use AscendTMS than any other single TMS,” said Higham. “Most of them tell us that they just want it to be able to have a simple integration where they enter some kind of token in a setting screen, or they integrate by entering a user ID and password, and then it’s set it and forget it. That’s how Ascend works. When you’re integrated with Trucker Tools, you simply click, ‘I want to track with Smart Capacity’ and between Ascend and Trucker Tools we do the rest. We basically make sure that the driver has the Trucker Tools app on their phone. If they don’t, they’re invited to download the app. The Trucker Tools app is extremely simple to use, otherwise 1.5 million drivers wouldn’t be using it and the statistic about the app being the least deleted app in the industry is amazing. That means it works. The tools that are inside this app go way beyond the ability to be tracked. Drivers can use the app to find things like weigh stations, the cheapest gas, rest areas and a million other things.”

Higham went on to say that the integration itself does all the heavy lifting. AscendTMS will display a map of the route so that it’s easy to see where the truck and load are and whether it’s on time or not. Once the driver reaches the final destination, they’re prompted to upload PODs through the Trucker Tools driver app and with a few clicks. The PODs are automatically uploaded to AscendTMS and attached to the specific load within the TMS with an image of the document uploaded. Higham stressed during the webinar that no technical expertise is needed and that Trucker Tools and Ascend handle all of the backend integration between the two platforms.

“I think that the old ‘post and pray’ method is changing rapidly,” Higham said. “As you know, digital tools have become more proven and they work. People within the industry talk to each other and everybody now seems to be moving to more digital tracking and freight matching and away from the posting and praying methodology. What’s interesting here is that the vast majority of brokers use load boards where you are literally posting and then you’re waiting. It’s just how it works. You can start making phone calls to see which trucks are posted, but today a lot of people don’t post their trucks for many reasons. Most carriers are very small or they’re owner operators with one truck and they don’t want to post that truck as being available because they don’t want to be inundated with 300 phone calls. Smart Capacity takes that entire idea of load boards to the next step, which is when you post to Smart Capacity, you are not only just posting and waiting. You can actually become active in that process.”

If you open a load that needs to be covered in AscendTMS, simply click on Smart Capacity to search in real-time for all of the trucks in a particular radius from your pickup point. The display will show you the status of each truck and whether it will be available soon or not. You also can narrow or broaden the search radius. Unlike load boards, Trucker Tools’ Smart Capacity uses the real-time movement of trucks to provide you with data on where capacity is available and where and when it will be available in the future. As Higham said in the webinar, Smart Capacity is much more efficient than load boards and saves freight brokers a lot of headaches. It’s also worth noting that 90 percent of all of the digital freight matching that happens with Trucker Tools’ Smart Capacity is initiated by carriers or owner operators.

“There’s an entire revolution taking place right now in the industry and it’s all about value,” said Higham. “The systems and the technologies that you choose should provide you with value, whether that’s less staff needed to do the same amount of work or to be able to bring in more business with the same number of staff or even a smaller number. Technology should provide a value-add to your organization and AscendTMS and Trucker Tools provide that. Most people aren’t very technological in their mindset. Only one in approximately 300 people is able to be a programmer and a lot less than that can be good programmers. Most people don’t want to have to deal with technical hurdles to switch something on to use it. Ascend and Trucker Tools have been extremely successful these last few years because we take all of the technology headache away. We allow anybody in your organization to click a few buttons to learn how to use the integrated TMS and then become effective within minutes, rather than presenting hurdles that make the technology difficult.”

For the rest of the conversation, watch the webinar on demand.