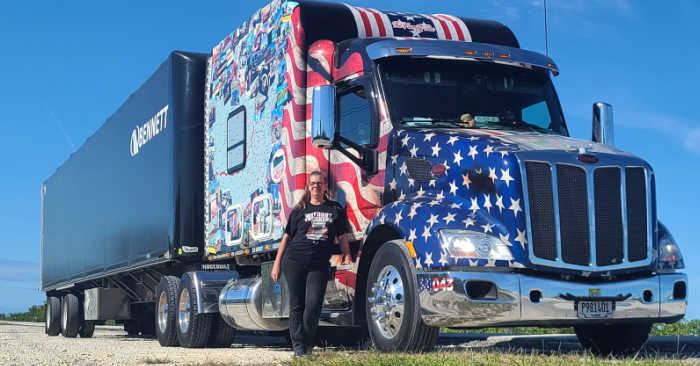 We recently interviewed Holly O’Donnell, a now former owner operator based out of Tennessee who had been team driving arms, ammunition and explosives for the military with her husband, Mark, for the last three years. Before she left trucking to care for her aging parents, Holly spent 25 years working in the trucking industry as a company driver and owner operator. In our conversation with Holly, she shared why team driving was a good fit for her and husband. She also spoke to us about the Family Tree wrap that was designed for their 2018 Peterbilt and how she thinks trucking has changed over the last two plus decades, all of which we share with you here.

The Benefits of Team Driving

Holly has been team driving with her husband for the last six years. Most recently, she and Mark drove for RNR Trucking and then Bennett. According to Holly, team driving has been a great experience and has several pluses.

“As a female, it’s security,” said Holly. “You’ve got another person in the truck. You also have another set of eyes on the road and someone to check your other set of mirrors. Trucking can be very lonely, especially if you’re driving at night. With teaming, you’ve got that other person there. If you’re on your 34 hour reset, you’re not just sitting there bored. You have that human connection with somebody when you drive as a team. Plus, if you get into a backing situation, you have somebody to stand out there and back you. My husband and I have certain hand signals that we use because if it’s a noisy area, if it’s windy, if it’s raining, other trucks are running or whatever’s going on, you can’t hear. You need to visually be able to communicate with almost like a sign language.”

The Family Tree of Trucking

When it came to designing a vinyl wrap for their 2018 Peterbilt 120-inch custom sleeper, Holly and Mark knew they wanted to make it a tribute to the trucking industry and for it to focus on the history of trucking. The wrap, which they call The Family Tree, was unveiled at The Great American Truck Show in Dallas in 2019. The design includes a giant American flag, a map of the United States, and photos from all across the industry and country.

“Technically, it’s considered our truck, but it’s the trucking industry’s truck,” said Holly. “It belongs to every driver out there, for anybody that’s dealt with trucking past, present and future. Let me put it this way: if the world went to crap and we had to sell that truck, the truck doesn’t mean a damn thing to me. That wrap is what I would miss more than anything. It’s the same way with Mark. It’s the wrap that has the meaning. That’s history right there. We have taken home some prizes at truck shows, but we’re not in it for that. We are in it because Mark and I have been here more than a year or two and we want to thank everybody out there because this is not a job. It’s a lifestyle and it has its challenges. Without every truck or person involved, it wouldn’t work. You know, companies say, ‘Oh, it’s your drivers that make the company,’ but if you don’t have dispatchers and load planners, I’m not going to have anything to haul. It takes everybody. It takes Walmart to call a company, to talk to a load planner, to work the details out, to give it to the dispatcher, that dispatcher to give the load to the drivers, the driver to go pick it up and deliver it. It’s not just a driver. It’s a whole bunch of people involved. Trucking is a family.”

How Trucking Has Changed Since 1997

“There’s a lot of modern technology now and you don’t have the communication on the CB radio as much anymore,” Holly said. “We used to drive and drive and just hold a conversation and everybody would talk on the radio. Especially when you’re a solo driver, back then years ago before you had Sirius XM, you had people that were just listening to the regular radio and would change the channel when the signal ran out. As a trucker back then, you didn’t really have a lot in cell phones. If you were in Wyoming, you were in roaming and you had to pay extra so you didn’t talk to anybody or you had no signal and you were wondering that whole time, ‘Did I get a call from home? Is everything okay at home?’ As soon as you’d get a signal, you’d call home to make sure you didn’t miss that call.”

Holly also told us that she and Mark’s Peterbilt has the OnGuard system, which is a big change. With OnGuard, if you get too close to another truck, the truck will brake for you automatically. Using GPS technology on a daily basis is a major change, too, according to Holly. Holly says that she likes GPS because of the ETAs it provides and because it tells her where rest areas are on her route, but she also still uses an atlas when needed.