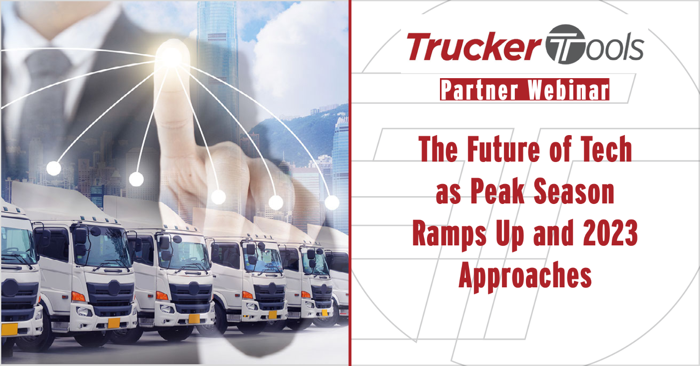 In a recent webinar with TIA, Trucker Tools’ CEO Kary Jablonski was joined by CEO & Co-founder of Zuum Transportation Mustafa Azizi to discuss what you can expect as a freight broker in the second half of 2022. Held as part of TIA’s Lunch and Learn series, the webinar centered on the challenges of the first half of the year, while offering insights and strategies on how to prepare for the rest of 2022 and beyond. The webinar examined the increasing pace with which digitization and mobile technology are being adopted and how these technologies can help you and your business in the future.

Check out these highlights from the webinar.

The Current State of Freight

“When I came into the trucking market, I learned that trucking is the spearhead of the economy,” said Azizi in the webinar. “Ever since the 2008 banking collapse, we’ve had a 14-year run where people weren’t using words like recession, stagflation or slowdown in reference to the economy. People are talking about those things now. Up until recently, you could count on things picking up in reefer season in March and every year had an up and down. Now we’re into these longer three-year cycles. In the last three years it has been really expensive to find a truck and hard to find capacity, which was caused by a bigger problem that has been happening over the last 20 years — the driver shortage.”

According to Aziz, China port shutdowns, the driver shortage and the resurgence of Covid-19 caused the first low season in trucking in quite some time, chilling trucking rates. Azizi noted that declining trucking rates impact brokers, as well, and that both carriers and brokers are being squeezed by rising fuel prices and other economic pressures. Despite dips in freight volumes and shifting consumer demand, Azizi doesn’t think the current downward trend will last.

“I truly believe that this is a murmur and we’re going to be going back into the broken supply chain and high rates again,” said Azizi. “What goes down must come up. I don’t know when this low season is going to end, but I assume there’s going to be some kind of peak season here in September and it’s going to kick up. This time it’s going to last even longer than three years.”

Technology as a Differentiator and Relationship-Builder

Azizi noted that adopting new technologies can make your business more efficient perhaps even more importantly differentiate you from other brokers when levels of service are equal.

“I’m hearing from some brokers now that due to the slowdown of freight that they’re delaying technology decisions until next year and putting that on the backburner,” Azizi said. “I think that’s really, really dangerous because as a brokerage, you should focus on optimizing your relationship with the carrier. A lot of people need to understand that even if you get contracted freight from a shipper, it’s still spot between you and the carrier until you find a dedicated carrier, so it’s a double sale. First you have to contract the freight from the shipper, then you have to contract the carrier. There are tools to help you better manage those contract relationships through technology and make it a lot easier for you.”

Logistics companies can sometimes lose internal, tribal knowledge about certain customers and carriers when employees leave a company. He said it’s better to adopt technology-based systems that digitize this tribal knowledge. These systems that you implement also can help retain your employees in the long term.

“You’re either a victim of external things that happen to your company or you are proactive and always getting ready for the winter, making sure that you’re stacked up with technology,” Azizi said.

What’s Next in Freight Tech

“Trucker Tools and Zuum very much see eye to eye in that we are both in the business of pooling capacity in different ways and lighting up dark capacity,” Jablonski said. “Our marketplace models are slightly different, but it’s all about getting all of those carriers —especially long tail carriers — onto and into a single marketplace where they can work with several different brokers and develop relationships across the board, lowering costs for everyone.”

Azizi agreed, saying he sees pooling capacity marketplaces into a global share pool as the future of trucking. Doing so is what’s best for the industry, whether you’re a carrier, a broker or a shipper, as it’s what will unbreak the broken supply chain, according to Azizi.

“So how do you do that?” Azizi asked. “You work as partners and you collaborate to move our footprint forward. Whoever works to illuminate that dark capacity better will ultimately be the biggest benefactor. We just need the platform to play together and rules behind it that are fair for everybody.”

Azizi also feels the technology gold rush in logistics hasn’t yet reach its peak. He predicts that all stakeholders in the industry are poised to adopt more and more technology. More and more younger people entering the transportation industry will further increase tech adoption because these younger people are digitally minded.

“I think you’re exactly right,” Jablonski said in agreement. “Gen Z is entering the workforce right now as the most highly educated, the only digitally native generation. Plus we have the baby boomers retiring, which is pushing a generational shift to increase the technological adoption curve quickly.”