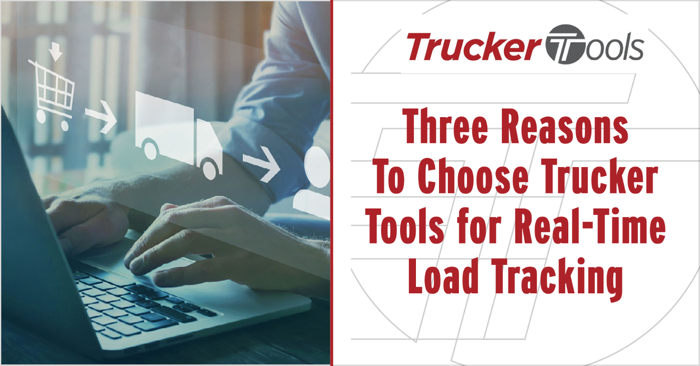 As the owner of a freight brokerage or logistics business, you recognize that real-time visibility is important to your customers. However, you may be overwhelmed by the number of software options available to you when it comes to choosing a load tracking technology for your company. In this blog, you’ll learn why Trucker Tools is the industry’s best-in-class visibility technology provider — and how companies that implement our real-time load tracking tech often achieve results that leave our competition in the dust.

Check out these three reasons to choose Trucker Tools for real-time load tracking.

The first product we created here at Trucker Tools was our all-in-one app for truckers, the Trucker Tools driver app. Since we first launched the driver app in 2013, we’ve added new tools and features based on feedback from real truckers and carriers. Today, the Trucker Tools driver app is the industry’s number one downloaded app month after month with nearly 2 million drivers and 250,000 carriers on our platform. Truckers use the app to track loads for brokers, find and book backhauls, locate the cheapest fuel, and to find parking, weigh scales, truck stops, rest areas, food and much more.

Unlike many driver apps, the Trucker Tools mobile app includes multiple tools and features that benefit drivers and help them save time and money on the road. Our app doesn’t just track loads for brokers. It’s a valuable technology that drivers can use to quickly access the information they need and then get back to driving and earning. In fact, many of the drivers that are moving your loads likely are already using the Trucker Tools app in their day-to-day operations.

When truckers find value in a technology, they’re more likely to use it and keep it on their phones. Brokerages and logistics companies that use our real-time load tracking platform with our companion driver app often are able to achieve much better results than with our competitors’ technology. The reason why is that drivers often already have Trucker Tools’ mobile app on their phones and if they don’t, they’re often willing to download an app that can truly help them run more efficiently.

3. Integration with Your Shippers’ Software Platforms

In addition to integrating with your TMS, Trucker Tools’ real-time visibility platform integrates with the visibility software used by many shippers, including MacroPoint, Project44 and FourKites. This integration capability means your team doesn’t need to manually fill out spreadsheets for your shippers with updated ETAs on each and every load. Instead, you can automatically and instantly share visibility data from Trucker Tools’ load tracking platform with your shippers in real-time.

Trucker Tools’ ability to integrate with the visibility software used by shippers allows you to provide a higher level of service to your customers. They’ll receive delivery updates in real-time, which empowers them to provide better service to their own customers. This integration capability also simplifies internal workflows and increases your employees’ efficiency because they don’t have to manually call customers with delivery updates or log into MacroPoint, Project44 or FourKites to manually enter tracking updates.