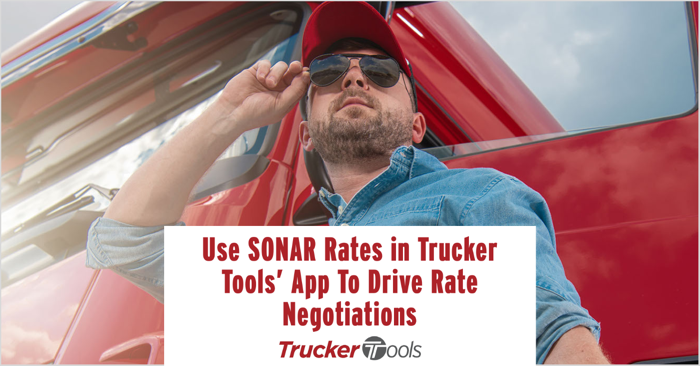 Big news! FreightWaves SONAR rate data is now available for free for truckers in Trucker Tools’ driver app. Trucker Tools’ integration partnership with FreightWaves SONAR’s brings real-time rate and lane insights from the SONAR forecasting platform directly to the driver app. For each non-Book It Now® load that you view in the Trucker Tools driver app, SONAR data on the current average rate for a load in that lane automatically will be displayed, as well as average high and low rates in the lane. With this information literally at your fingertips, you can streamline your rate negotiations with brokers (and shippers) and negotiate freight rates with confidence.

SONAR is FreightWaves’ subscription-based forecasting software platform that uses data from electronic tenders, BoLs, telematics and transportation management systems to provide rate and lane insights on specific U.S. freight markets. The SONAR rates you see in the Trucker Tools driver app are collected at the point of booking, i.e. when carriers/owner operators accept a load from a freight broker or shipper. This ensures rate and lane insights are as accurate and current as possible.

As a Trucker Tools driver app user, you can access real-time rate and lane insights from SONAR for free in the app. Thanks to our integration partnership with FreightWaves SONAR, you don’t need to sign up for or purchase a SONAR subscription in order to view SONAR’s insights in Trucker Tools’ driver app.

With FreightWaves SONAR rate and lane insights displayed on every non-Book It Now® load in the Trucker Tools driver app, you gain access to rate data that many of your fellow owner operators don’t have access to or must pay for. Instead of trying to research on your own whether the rate you’re offered or are quoting on a load is fair, you can instantly see the current average rate for that type of load in that particular lane in the app. The average high and low rates also are displayed on each non-Book It Now® load you view in the app.

With this information instantly available to you in the Trucker Tools driver app, you’re better equipped to negotiate a fair rate on each load you book. Access to SONAR’s rate insights also helps you avoid inadvertently pricing a load too low, which can happen when you are just starting out as a trucker, running a new type of freight and/or are running in a new lane. With SONAR’s rate info, it’s also much easier to calculate your net profit on a load before you agree to transport it.

17+ Other Features and Tools That Save You Time and Money

If you’re not already using Trucker Tools’ free driver app, know that the app includes 17 plus other tools and features designed to save you time and money on the road. In addition to providing you with real-time rate and lane insights, the Trucker Tools app helps you find weigh scales, parking, rest areas, truck stops, grocery stores, truck washes, restaurants, medical facilities, loads and backhauls, repair shops and more. You also can use the Trucker Tools driver app to digitally track loads for brokers, trip-plan, calculate your fuel spend, purchase cargo insurance, book loads and calculate your axle weights.

Trucker Tools has just launched the industry’s first-of-its-kind new Driver Loyalty Program in the driver app, as well. With our new Driver Loyalty Program, you earn TruckerPoints with each action you take in the Trucker Tools driver app. Once these points accrue, you can cash them in for free gift cards to 200+ U.S. retailers. At a time when operating expenses are at all-time highs, these free gift cards can give you a financial boost just for digitizing some of your daily tasks with the driver app.