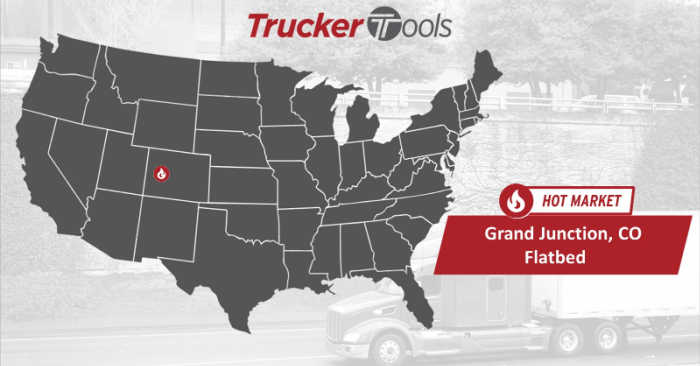 Based on the most recent transaction data from our platforms, the five hottest markets for truckers over the next week will be Cheyenne, Wyo. (flatbed), Rapid City, S.D. (flatbed), Tucson, Ariz. (reefer), Grand Junction, Colo. (flatbed), and Jacksonville, Fla. (power only). Keep reading for more market insights on where demand and rates will be heating up and cooling off.

Where Demand, Rates Will Be Increasing

Where Demand, Rates Will Be Decreasing

Trucker Tools is partnering with FreightWaves to give you detailed information on some of the most popular lanes in the country. In today’s Daily Outlook, FreightWaves advises truckers and carriers to accept tendered loads in the Chicago to Elizabeth, N.J., lane since reloads out of Elizabeth should be easy to find. If you’re running Indianapolis to Nashville this week, consider covering this lane on the spot market for higher rates. For Los Angeles to Dallas, it’s recommended that you search the spot market for dry van loads to capitalize on the backup of shipments caused by recent winter snow and ice storms.

For more insights into where demand and rates will be high and low this week, read Rapid City, Tucson, Austin and Cheyenne — Best Markets for Truckers This Week. To download Trucker Tools’ free driver app, visit https://www.truckertools.com/carriers/.