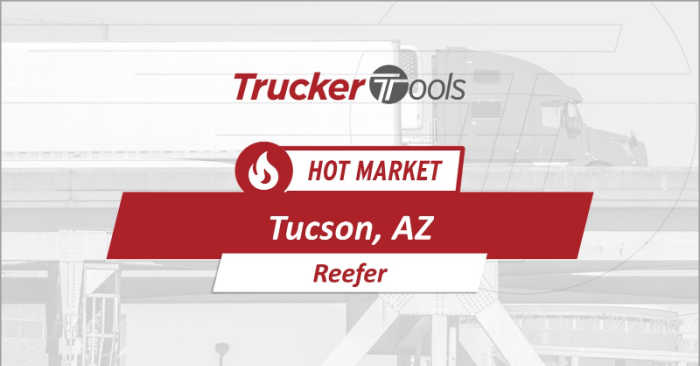 Wouldn’t it be valuable if you knew where demand for trucks will be high and low in the next week? Armed with this knowledge, you could maximize your earnings by passing on loads that would take you into areas where rates are projected to be low. Instead, you could make markets where demand will be high a top priority. Trucker Tools’ three times/week market report, “Where’s the Freight?” provides exactly this information to drivers and carriers — for free. We use data from our broker, carrier and driver platforms to project with accuracy where trucks will be needed the most and least over the next five to seven day period.

In today’s edition of “Where’s the Freight?” reefer and flatbed markets dominate our top five hottest markets list for truckers and carriers list, reflecting nationwide demand for both types of capacity. Keep scrolling to find out where rates and demand will be high and low in the coming week in today’s edition of Trucker Tools’ “Where’s the Freight?”

Trucker Tools is partnering with FreightWaves to provide you with information on some of the most popular freight lanes in North America. In today’s Daily Watch, FreightWaves is reporting that national outbound freight volumes are down from last week, but that demand for trucks in several markets remains elevated. If you’re a dry van driver or carrier with a truck/trucks in the Kansas City area, FreightWaves recommends that you target the spot market for loads running Kansas City to St. Louis. For reefer drivers/carriers, Atlanta to Indianapolis is projected to be a hot market this week, as reefer capacity currently is in high demand in both markets. With rejections high out of Harrisburg and Chicago projected to be a profitable destination for carriers/drivers, it’s also recommended that you check the spot market for loads running from Harrisburg to Chicago before accepting tendered loads.