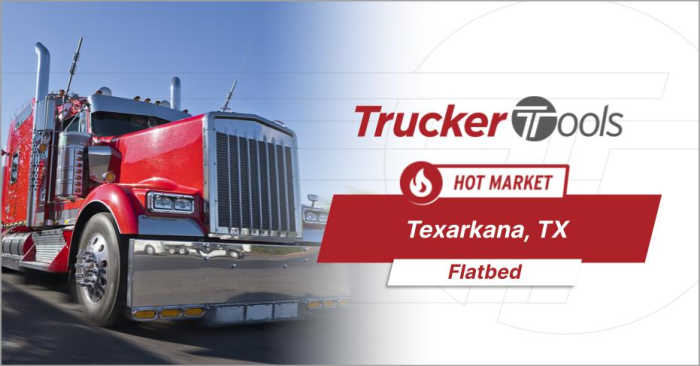 Happy Friday, truckers and carriers, and welcome to your TGIF edition of “Where’s the Freight?,” Trucker Tools’ free freight forecast that tells you where demand and rates will be highest and lowest across the United States and Canada over the next five to seven days. With this information in hand, you can avoid taking loads into markets where you’ll lose money on the backhaul and prioritize loads where demand is projected to be high.

In the coming week, the Dodge City, Kan., reefer market once again is expected to see extremely high demand, which is why it’s at number one in today’s Top Five Hottest Markets list. If you’re wondering why Dodge City, Kan., routinely appears in our Top Five, it’s because the city is home to several of the largest meat processing plants in the United States. In flatbed news, Texarkana, Texas, will remain a hot spot for flatbed freight over the next week, while Brooklyn, N.Y., will continue to be a cold spot for flatbed loads. If you run power only, you’ll want to prioritize loads to/from New Castle, Del., San Diego, and Bloomington, Ill., this week, as demand and rates are projected to be high or increasing.

Where Demand and Rates Will Be Highest or Rising This Week

Where Demand and Rates Will Be Lowest or Falling This Week