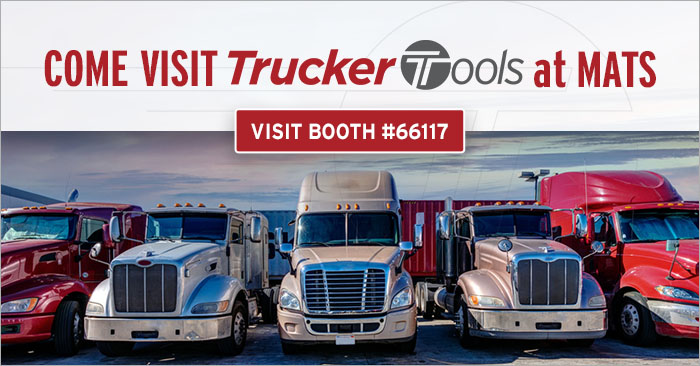 The Mid-America Trucking Show is back as an in-person, live event this March 24 through March 26, 2022, at the Kentucky Expo Center in Louisville, Ky.! Join the Trucker Tools team and folks from all across the trucking industry for three full days of networking, entertainment, education, technology showcases and more. With 70,000+ attendees, over 1,000 exhibitors, 40+ special events and 1 million square feet of exhibits, MATS promises to be one of the biggest trucking industry gatherings of the year. At this year’s show, Trucker Tools will be leading two educational sessions for owner operators and carriers, as well as hosting several meet and greets with Trucker Tools’ brand ambassadors at the Trucker Tools booth in the West Wing of the expo center.

Read on to learn more about what you can expect at this year’s MATS and about how you can connect with the Trucker Tools team while you’re there.

50th Anniversary for the Largest Trucking Event in the World

Since 1972, MATS has been bringing together trucking professionals, suppliers and manufacturers to network and showcase what they have to offer. MATS was born when Paul K. Young, the Kentucky Motor Transport Association President at the time, and a few friends wanted to develop a heavy-duty trucking show in the Eastern part of the United States. The first MATS was held at the Kentucky Expo Center in 1972 and included 4,000 attendees and 83 exhibitors. By 1987, MATS had grown to include 400+ exhibitors and more than 30,000 attendees, with truckers and carriers from across the globe starting to attend the annual event. In 1991, those numbers were up to 650 exhibitors and 35,000 attendees, making it the largest trucking tradeshow in North America! At this year’s event, more than 70,000 owner operators and carriers will come to MATS to learn what’s new in the industry, meet up with friends and colleagues, and to see the newest technology up close and personal.

On Friday, March 25, at 10 a.m., on the PRO TALKS Stage in the East Hall, Trucker Tools will be leading a panel discussion, “How To Easily Book Loads With Technology.” This panel will be moderated by Trucker Tools’ Director of Marketing Tracy Neill and will feature owner operator Gerald Johnson, aka Trucker G, Kim Loescher, and Ed Prince from Redneckanize. The presentation will focus on how owner operators and carrier dispatchers can find and book loads digitally for free via the Trucker Tools app and Trucker Tools’ free carrier platform. In-app and online load booking reduces the number of phone calls you have to deal with from freight brokers and gives you convenient 24/7 access to your favorite brokers’ loads.

Trucker Tools’ second educational session will be held on Saturday, March 26, at 12:30 p.m. in the PRO TALKS Theater in the South Wing in meeting room B104. The session, titled “Business Tips for Owner Operators: How To Find and Make Connections on the Road,” will be moderated by Tracy Neill and will feature owner operator Jacinda Duran, aka Jacinda Lady Truck’n and Larry Cothran. This presentation will focus on how owner ops can use Trucker Tools’ tech to build relationships with freight brokers and logistics companies, run more efficiently and maximize profit margins. With Trucker Tools’ free driver app, you can as an owner operator locate the cheapest fuel on your route, book loads with your fav brokers, trip-plan, and find parking, weigh scales, truck washes, rest areas, truck stops and more.

Throughout MATS, we’ll also be giving away Trucker Tools swag at the Trucker Tools booth. Spin our prize wheel and win a Trucker Tools hat, shirt or travel cup. Can’t make it to MATS in person this year? No problem! Follow us on social media, share a selfie showing the Trucker Tools app on your phone and you’ll be entered to win a prize pack!

See you in Louisville!