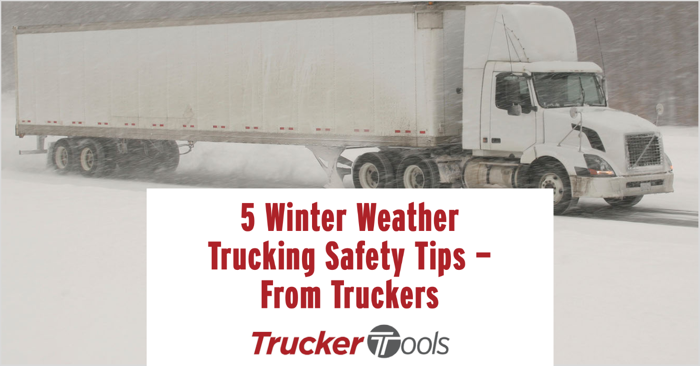 It’s that time of year again when freezing temperatures, blizzards, snow and ice can make getting that load delivered on time just a little more difficult. Unlike many folks, as a trucker you can’t stay home when the weather gets bad. Instead, you have to balance getting there safely with delivering on time. In this blog, you’ll hear from veteran drivers from across the country about their strategies for dealing with ice and snow on the road. From using laundry detergent to melt snow to avoiding using cruise control, these drivers share their top winter weather trucking safety tips.

“When my truck jack-knifed, I actually hit black ice,” says driver Pinkie Dabney about a recent experience. “I believe that I was going too fast for the conditions. I was going the speed limit, but I should have been going way under the speed limit. The main thing in dealing with winter weather is to be vigilant, not being distracted and to have common sense. If it’s really that bad, no load is worth your life.”

“The main thing in dealing with winter weather is to be vigilant, not being distracted and to have common sense. If it’s really that bad, no load is worth your life.”
– Pinkie Dabney

In a survey of nearly 200 truckers, many reported that they tend to avoid using cruise control when roads get icy or snowy. Truckers who responded to our survey said they don’t use their Jake brakes when driving on snow or ice because it only slows the tractor and not the trailer. Using your Jake brake on snow or ice can cause you to jack knife.

4. Use Laundry Detergent in a Pinch To Melt Snow and Ice

A shout-out to owner operator Larry Cothran for this smart tip.

“I was once was stuck in New Jersey because the roads were shut down because of a storm,” said Larry. “I don’t like to do winter driving, but if the money is there, sign me up because I’m going. I always tell new truckers to learn everything they can about winter driving. One thing I’ve learned is that if you have Tide or some kind of laundry detergent you can pour it around your tires and it’ll melt the snow.”

Some states like Oregon, Washington and Colorado have laws in place that require you to use chains during winter months and/or on heavy loads.

“I sometimes go to the Colorado highway’s website to get information on their chain laws,” said Wayne. “I sign up for email updates from some highway associations to stay on top of their chain laws, as well.”

Learn “How To Join and Use Trucker Tools’ Free Driver Loyalty Program.”