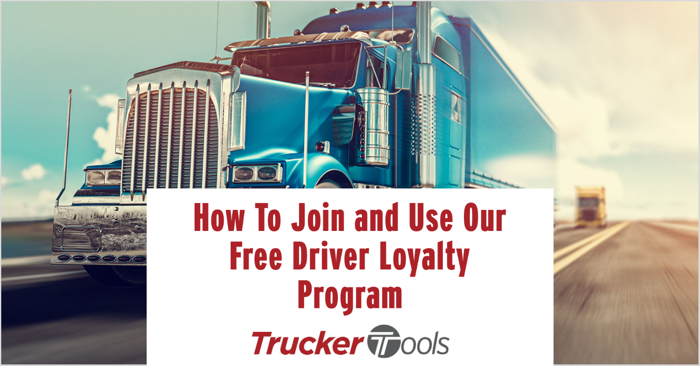 Last month, we launched a brand new Driver Loyalty Program in the Trucker Tools driver app. This new loyalty program is free for drivers and is designed to encourage repeat business between truckers like you and your favorite freight brokers. Here’s how it works: brokers award you with TruckerPoints for doing things like booking loads, tracking, and uploading PoD and BoL docs through the driver app. The TruckerPoints that you earn for completing these tasks in the app can be redeemed for free gift cards to 200+ U.S. retailers. During the month of December, we’re also offering 100 bonus TruckerPoints for every Book-It-Now® load you book through the driver app.

Read on to find out how easy it is to sign up for our new Driver Loyalty Program and redeem your TruckerPoints in the Trucker Tools driver app.

Once you’ve verified that you have the latest version of the Trucker Tools app on your phone, tap on Driver Loyalty Program in the app’s three-line hamburger menu, agree to the terms and tap on Join. It’s as easy as that!

To see which companies currently are offering TruckerPoints rewards through the app and for what actions, tap on EarnPoints (gear icon) once you’ve opened Driver Loyalty Program from the main menu. In this example below, you can see that Trucker Tools and Simple Logistics currently are offering TruckerPoints rewards. If you tap on each offer, you can view more details on how many points are being rewarded and how you can earn them. You can save offers that you’re interested by tapping on Save when you’re viewing an offer. To review any offers that you’ve chosen to save, tap on the Saved button (heart icon).

After you’ve accrued TruckerPoints, you can view the different gift cards that are available to you in a matter of seconds. Simply tap on Rewards (Trucker Tools icon) in the Driver Loyalty Program section of the app to see the different types of gift card rewards available and how many TruckerPoints are required for each. You can redeem your TruckerPoints for gift cards to more than 200 of the most popular retailers in the United States. These retailers include popular restaurants, grocery stores, game and music subscription services, movie theaters, clothing stores, coffee shops, electronics stores, auto parts stores and many others.

Tap on each reward for additional details, including info on how the gift card can be used. If you’re not quite ready to redeem your points and you want to save this reward for future use, tap on Save. You can bank your TruckerPoints for as long as you want. Once you’ve found the reward you want, tap on the reward and then hit Redeem. That’s it! After you redeem your TruckerPoints in the Trucker Tools driver app, you’ll receive an email with your gift card.