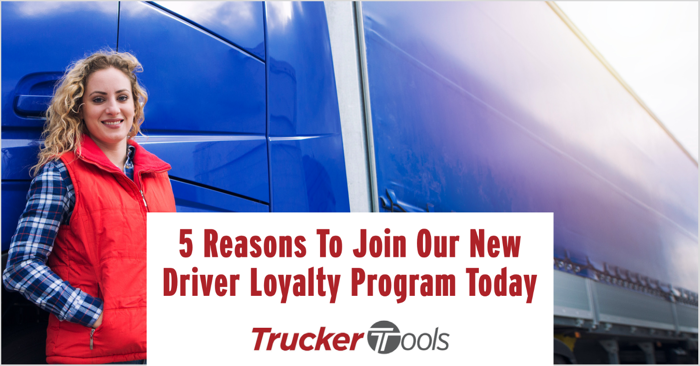 Last month, we launched the trucking industry’s first-of-its-kind Driver Loyalty Program that rewards truckers like you for using Trucker Tools’ free driver app. With our new Driver Loyalty Program, you earn free TruckerPoints for taking certain actions in the driver app. These can include booking loads, sending brokers digital rate quotes, tracking loads, uploading proof of delivery documents and more. The TruckerPoints that you earn can be redeemed for free gift cards to hundreds of U.S. retailers, including big names such as Home Depot, Spotify, Under Armour, Gamestop, Garmin, Redbox, R.E.I., Sam’s Club and many others.

Trucker Tools’ new Driver Loyalty Program is free for truckers. Signing up is easy. Simply visit the three line hamburger menu in the driver app and tap on Driver Loyalty Program. Once you do, you must agree to the terms and conditions and tap on Join.  That’s it! After you join, you’ll be able to view a dashboard with a list of participating vendors, as well as available rewards and TruckerPoints that you’ve redeemed. You also can see how many TruckerPoints you have accrued.

Brokers set specific rewards around certain tasks being performed in the app, such as tracking and booking loads. Once you complete those actions, you earn TruckerPoints automatically. Now through Nov. 13, any time that you book a Book It Now® load with any broker you also will earn an additional 100 TruckerPoints. To find out what rewards are available to you, tap on Earn Points in the driver app under Driver Loyalty Program.

Once you’ve earned TruckerPoints in the program, you can redeem those points for gift cards to more than 200 U.S. retailers. To redeem your TruckerPoints, go to Driver Loyalty Program in the three-line, main menu. Then tap on Rewards, which has the TruckerPoints emblem displayed above it. Doing so will show you what rewards are available and how much each reward will deduct from your TruckerPoints balance if you choose that reward.

5. Rewards You for Actions You’re Already Taking in the App

If you’re one of the nearly 2 million drivers or 250,000 carriers already using Trucker Tools’ free driver app, you’ll be rewarded for actions you’re already taking in the app. That means you don’t have to do anything different from what you’re already doing — simply sign up for our Driver Loyalty Program and start earning! If you’re not yet using Trucker Tools’ free driver app, you can download it for free through the Google Play Store or Apple’s App Store.

Learn how to “Speed Up Rate Confirmations with Trucker Tools.”