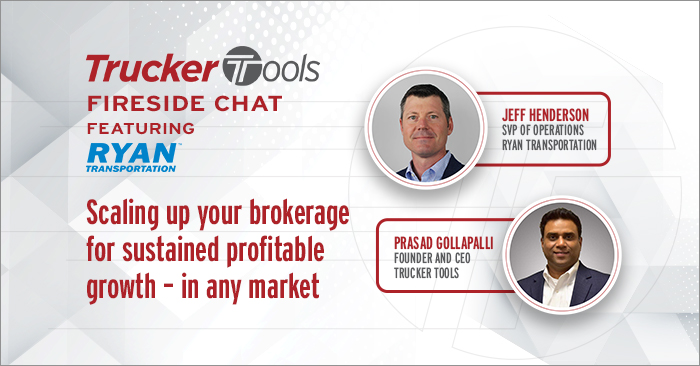 Trucker Tools’ CEO and Founder Prasad Gollapalli recently was joined by Ryan Transportation’s Senior VP of Operations Jeff Henderson to discuss “Scaling Up Your Brokerage for Sustained Profitable Growth — in Any Market.” The webinar centered on the lessons learned and successful strategies that Ryan Transportation has deployed during the pandemic to improve carrier engagement, provide reliable service to shippers and achieve growth. As part of the discussion, Gollapalli and Henderson spoke about some of the pandemic’s continued challenges and how technology has helped Ryan navigate these unchartered waters, while highlighted the company’s core strengths.

“If we look at the most obvious right off the bat, the biggest challenge is the ever changing market and the pricing fluctuations that we have seen over the last couple years now,” explained Henderson. “Just take a look at 2022. As we’ve started the year, it is has probably been one of the most unpredictable Januarys we’ve ever seen so far. Normally January is the most predictable month of the year. It’s the time of year when you start thinking about beginning your year, your overall strategy, pricing strategies and things like that. That predictability really been thrown out of the window and makes it increasingly more challenging — especially when January is the big month for yearlong RFPs. Recently, we’ve spent a lot of time talking about those and what our strategy is for those RFPs.”

Henderson also noted that like many 3PLs and businesses outside of transportation, Ryan Transportation had to make internal operational adjustments because of the pandemic. According to Henderson, remote work and providing continuous staffing were challenging when the pandemic first began. Henderson also said logistics typically is very cyclical and in the current market, 3PLs can no longer rely on what’s happened in previous years to anticipate what will happen next in the transportation market, which has been a major adjustment.

“It’s about trying to decrease that one and done type of carrier,” Henderson explained. “As Prasad said, 150,000 carriers entered the marketplace last year, many of whom were owner operators, and we’re trying to keep them coming back and to become a broker of choice for those carriers. Secondly to that, we’ve always had the mindset that carriers are the cornerstone of our business. I can’t bring capacity to the customer and continue to grow if I do not have a great relationship with my carriers and make it easier to engage with my carriers. All of our other business units under the Shamrock trading umbrella, their core focus is on the carrier as well, which creates a great focus for our other business units.”

Henderson went on to say that Ryan makes it easy for carriers to do business with the company by offering a faster signup process, listening to feedback, offering premium loads to top tier carriers and providing a guaranteed detention program, which was just recently introduced. That carrier-first mentality includes the use of Trucker Tools app for load tracking, which can be used to document dwell/detention time. Henderson noted that all of the above help Ryan Transportation fulfill capacity for its customers, which is the end goal.

Technology Can Reduce Complexities Faced by Owner Operators and Carriers

“If I was an independent owner-operator, I would really look to partner with three or four brokers with load boards or digital freight matching that I like and I would spend the time setting up my preferences with them,” Henderson said. “What type of freight am I truly looking for on a daily basis? You can almost let the technology do the work for you. There’s so much freight out there in the marketplace. You can effectively bounce from metro to metro and never be without a good paying load because every market is flooded with freight. If you set those preferences up accordingly, you can be notified when a load pops up where you’re looking for freight. Five or six years ago, you didn’t have that. You had to rely on going to the standard load board and doing searches. Now with push notifications, you can really let that technology do the work for you.”

Henderson also stated that automating load tracking with either an app or ELD allows drivers and dispatchers to be much more effective because they’re not getting calls for updates from brokers. He noted that they instead can spend more time looking for and responding to the next great load or best paying load. Technology also can help that dispatcher or driver find the best paying load quicker, which Henderson says can reduce empty miles and a carrier’s operating costs. For the rest of the conversation between Gollapalli and Henderson, watch the webinar on demand.