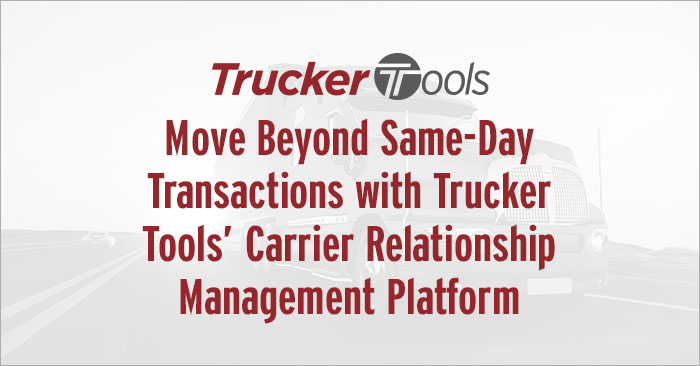 Imagine a technology that helps you build long-term, productive relationships with specific carriers, allowing you to build out your carrier network while tapping into highly coveted owner operator and small carrier capacity. That’s the value proposition of Trucker Tools’ Smart Capacity, a comprehensive carrier relationship platform designed to increase carrier engagement and encourage repeat loads with carriers. Unlike other technology platforms such as load boards, Trucker Tools’ Smart Capacity moves you beyond a single transaction, giving your team the tools to communicate with carriers in real-time, offer app and web-based load booking, and increase operational efficiency.

It’s been 40 years since the first load boards came into existence. Load boards made a splash in the industry because they were more efficient than using the whiteboards and TV monitors in truck stops that were popular at the time. They also provided both brokers and carriers with the means to expand and grow their books of business. The issue with load boards 40 years later in the current market is that load boards are primarily a transaction-based technology. It’s the reason why, in part, you’re likely onboarding new carrier after new carrier each month. The technology itself is designed to help you as a freight broker/3PL cover one load at a time, not to initiate and foster enduring relationships with specific carriers.

Trucker Tools’ Smart Capacity carrier relationship management platform is designed to do more than help your team cover a single load. Instead, it helps you build relationships with specific carriers for the long-term. With Smart Capacity, you can search for capacity from already on-boarded carriers or from within your network of preferred carriers first before searching for capacity in the broader market. Smart Capacity also allows your team to quickly search for capacity by lane, dates, type of equipment needed and other factors in a matter of seconds. Smart Capacity displays reload opportunities automatically so that when you do speak with a carrier about a specific load, you can book multiple loads in a single phone call, as well.

Cultivate a Digital Relationship With Carriers To Increase Efficiency

Carriers want good rates, fair treatment and convenient ways to communicate with your brokerage. With operating costs high, they also are looking for ways to become more efficient. As a Smart Capacity user, you’re empowered to cultivate digital relationships with owner operators and carriers. When a carrier or owner operator sees one of your loads in Trucker Tools’ free carrier platform or mobile app, they have the option to send you a digital rate quote through the app/platform. You also can make specific loads available to specific carriers if, for example you want to strengthen relationships with a set of top-performing carriers. Upload your loads as Book-It-Now® loads to our carrier relationship management platform and you give owner operators and carriers the ability to book your loads digitally without ever picking up the phone, sending an email or logging onto a load board.

Digitization of at least some of your manual carrier communications via Smart Capacity offers your business increased operational efficiency. It does the same for carriers, while reducing the number of technologies they need to use in their day to day operations. With Smart Capacity, your team has fewer manual phone calls to make to carriers to ask about trucks, fewer emails to write to carriers and less time spent chasing capacity on load boards that may have already been booked by another broker. When you use the Smart Capacity carrier relationship management platform in your operations, you also reduce the number of phone calls and emails that carriers must answer from your team. Carriers won’t have to log onto a specific load board to access your loads, which saves them additional time, too.

Freight markets across the world have been volatile over the last two years, which is why it’s important to have a robust carrier network at your disposal that you can access when demand and freight volumes run high. When you use Trucker Tools’ Smart Capacity in your brokerage operations, you gain access to Trucker Tools’ private network of approximately 195,000 active carriers on Trucker Tools’ free carrier platform and the 1.6 million drivers/owner operators who have downloaded the Trucker Tools app. Access to Trucker Tools’ massive owner operator and small to medium-sized carrier network also can be a game-changer when you take on a new shipper or when a current shipper wants to create new lanes.

To learn more about how the Smart Capacity carrier relationship management platform can help your brokerage business scale, read “Carrier Relationship Management Platforms: The Glue That Holds Your Network Together.”