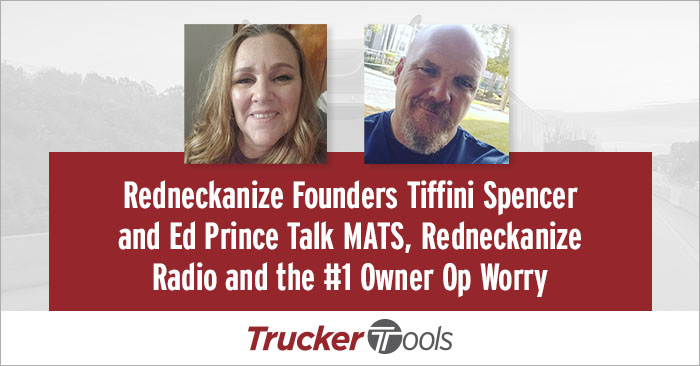 Back in early 2020, we first interviewed Tiffini Spencer and Ed Prince, two of the co-founders of Redneckanize, to learn more about the truckers group and how it got started. If you’re not familiar, Redneckanize was founded in 2012 at the Mid-American Truck Show. Since then, it’s become a place where truckers can share industry knowledge with one another, learn how to save money and do DIY repairs, and build fellowship with other truckers. We recently caught up with Tiffini and Ed to talk about Redneckanize’s presence at this year’s MATS, Redneckanize Radio and lots more.

Redneckanize at the 2022 Mid-American Truck Show

At this year’s MATS, March 24-26, Redneckanize will have its own booth in the exhibition hall, booth number 74108 in the Pavilion section of the Kentucky Expo Center. Redneckanize members will be giving away prizes at the booth throughout the show, including a free TV. You can expect to see Ed and Tiffini walking the exhibition hall floor, giving away prizes and interviewing people at the show. Ed also will be available at the Trucker Tools booth (number 66117) for several meet and greet sessions during MATS and will be part of a panel discussion with Trucker Tools on Friday, March 25, at 10 a.m. in the East Hall, as well.

Number One Worry: Rising Fuel Costs and the Price of Parts

Tiffini’s husband is a driver and together they run an owner operator business based out of Ohio. When we spoke with Tiffini, we asked her about the biggest challenges that she and her husband are facing and what she hears through Redneckanize about the challenges other owner ops are dealing with.

“The rising fuel costs and the price of the different truck parts is the biggest worry,” said Tiffini. “It is crazy for us with my husband driving and us owning our truck. With the oil prices being high, that has an effect everything else. When it comes to parts for the truck right now, you might be waiting six or seven months for something like a sensor. So in that six or seven months you could lose everything you own because your truck can’t run.”

Since we last spoke with Tiffini and Ed, Redneckanize has launched a weekly podcast on the Unplugged Radio Network called “Redneckanize Radio.” The podcast is an offshoot of Redneckanize’s YouTube channel and gives truckers the opportunity to call in, ask questions or just talk with Ed.

“It’s a place where drivers can kind of let off a little steam and voice their concerns,” said Ed. “The cool part about it is that we’re probably the only trucking podcast on YouTube, Facebook or any other platforms out there where we tell both sides of the story. We know that a lot of the problems in the industry are driver-related. We know that we’ve got to be able to fix ourselves just as badly as we need to fix other things. We’re telling it like it is. Drivers have to do better just as much as we want customers or the government to do better. The podcast is kind of a two-sided coin where we want to talk to the drivers and we want to help drivers to be better drivers, but it’s also just pointing out the craziness going on in the industry or the country or the world.”

To learn more about Redneckanize, visit https://redneckanize.com. To find out how you can catch up with the Trucker Tools team at MATS, check out “Connect with Trucker Tools at MATS March 24-26.”