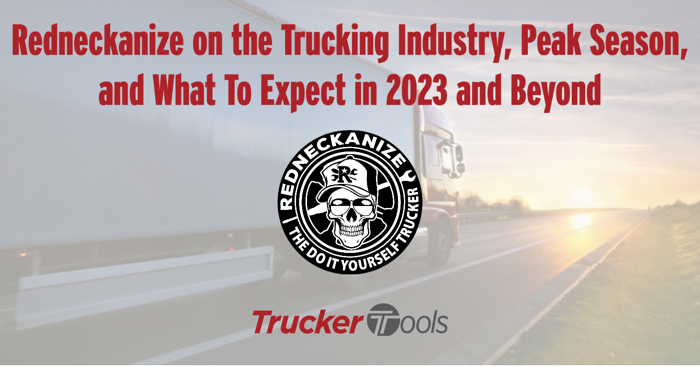 Back in 2012, a group of owner operators got together and began a tradition of sharing their trucking knowledge with one another and feeding truckers attending the Mid-American Trucking Show. That’s how the trucker group Redneckanize was born. We recently had the good fortune to catch up with our friends Tiffini and Greg Spencer of Redneckanize. Greg is an owner operator currently hauling steel and Tiffini handles dispatch and back office for their trucking business. When we spoke with the Spencers, we wanted to find out how they’re dealing with sky-high operating costs and what they’re hearing from Redneckanize members. In our conversation, we also learned about a new event that Redneckanize will be launching in 2024.

Check out these highlights from our conversation with Tiffini and Greg.

“Last year it was a lot better because the fuel prices were, of course, lower than what they’ve been recently,” Tiffini said. “There also was a lot more freight in 2021. There was a lot more freight for guys running flatbed or van. We’ve noticed just in the last few weeks how much freight has fallen off, how the prices for linehaul keep dropping and then the fuel prices went up. When you add brokers into it, it makes it hard for drivers to actually make any money off of the load they’re hauling.”

When Tiffini recently inquired about moving a load, she discovered that nearly half of the $1,900 that the load would have paid would go to the freight broker. According to Tiffini and Greg, these types of scenarios are common, which is causing some owner operators to bypass freight brokers to work directly with shippers. Others like Tiffini and Greg have stopped hauling dry van because it’s so difficult to turn a profit in the current market.

“When the pandemic hit and the ports were backed up, everybody went out and bought all the dry vans,” Greg said. “Now they’re wanting dry van loads hauled for nothing and you can’t do it. You can’t operate a truck on $1.50/mile, I don’t care who you are. Maybe you could in the late 1980s or early 1990s when fuel was 80 or 90 cents/gallon, but you can’t do that now.”

Tiffini and Greg also are hearing that some owner operators are moving to company jobs or driving local because they can make more money that way and be home every day.

Peak Season and Beyond

“I think it will pick up over the next three or four months because of the Christmas season coming along,” Tiffini said. “Will we go back to van in order to do that? There’s a possibility, but we’ve also seen that drop and hook and hauling FedEx trailers from point A to point B can always be a good option. I see it picking up for some, but not picking up for everyone. People who pull specialized freight need at least $6/mile and they’re not getting that now. It’s anybody’s guess what 2023 will be like, but I think after the midterm elections we may see some changes. We’ve been hearing that fuel prices are going to double by the end of the year compared to what they are now. I hope it stays like it is now or gets better.”

If inflation and the price of diesel go any higher, Tiffini anticipates seeing a lot of trucks and trailers for sale because drivers won’t be able to afford to maintain their equipment well enough to be able to pass DOT inspections or be able to afford repairs or insurance. Greg worries that hurricane season may drive the cost of diesel even higher than it is currently.

“We’re getting into hurricane season and all it’s going to take to make fuel prices go up even higher is one major storm to shut a refinery down,” said Greg. “That gives them an excuse to jack prices back up.”

Since the pandemic began in 2020, Redneckanize hasn’t been able to hold its trucker barbeque at MATS. The group had a booth at MATS 2022, which according to Tiffini helped bring a lot of new faces into the organization. Going forward, however, Redneckanize plans to focus its efforts on a new event that will bring together truckers in the same way that Redneckanize’s MATS barbecues did in previous years.

We’re starting to plan our own truck show called My American Trucking Show — Redneckanize Style. It will just be for truckers and basically will be a trucker picnic type event. It will be in July of 2024 at the Canfield Fairgrounds in Canfield, Ohio.

“We’re starting to plan our own truck show called My American Trucking Show — Redneckanize Style,’” said Tiffini. “It will just be for truckers and basically will be a trucker picnic type event. It will be in July of 2024 at the Canfield Fairgrounds in Canfield, Ohio. We can rent 350 acres at the fairgrounds and there’s also a stage there, so we’ll have music. We’re planning to do truck pulls and stuff like that. It’s going to be good. We’re doing a light show for the trucks and other fun stuff, too. It’s going to be a family-oriented, fun event. The first year might be a little bit slow getting going, but we’re hoping that it will get bigger and better every year.”

To learn more about Redneckanize, visit https://redneckanize.com or tune into Redneckanize Radio on Unplug Radio Network every weekday at 7 p.m. EST.