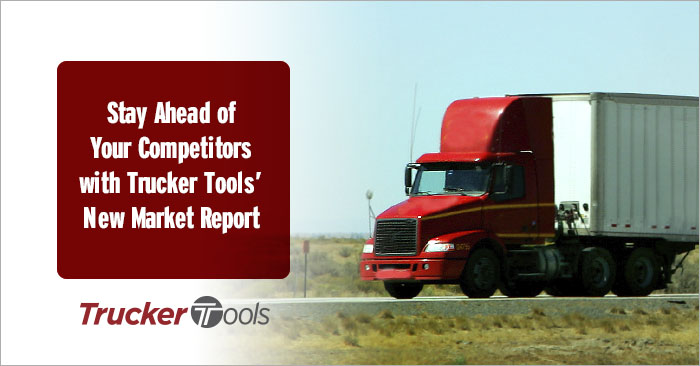 It takes time to get into markets where rates are high. By the time you get there, the rates in that region may have gone down. Trucker Tools’ new Market Report helps you get into hot markets faster and stay one step ahead of the competition. Our new market reports don’t tell you where rates and volumes are high right now because you already know that. Instead, our Market Report tells you where the hot markets will be several days from now. The Trucker Tools Market Report is especially valuable if you’re a small carrier because it allows you to move your assets into regions before their markets heat up.

How Most Rate Predictions Work

Most rate predictions are based on trucks vs. loads ratios that compare current rates with past rates. These indexes look at data from previous years to identify seasonal cycles to make predictions for the future. The problem with this approach is that it’s a backward looking system. These rate projections are just that: projections based on what has happened in the past.

To illustrate why this is a problem, let’s say, for example, there are 10 loads and five trucks available today in Reston, Va. The rates are going to be high and the market favors carriers today. Other trucking companies and owner operators in the country see the rates are high today, so they drive to Reston tonight to try to capitalize on the high rates. Tomorrow, you may have 20 trucks in Reston and only 10 loads available. Ten trucks came into the Reston market because they heard about the high rates, plus the 10 inbound trucks that were already headed into Reston anyway. It’s a constant seesaw of supply and demand. As a result, rates go down tomorrow for Reston. The truckers who came into the area to capitalize on the high rates have arrived too late.

Using Real-Time Data To Look into the Future

Knowing which markets will be hot in two or three days from now gives you an enormous advantage over your competitors. Instead of arriving a day too late to take advantage of the high rates coming out of Reston, with Trucker Tools’ Market Report, you would have known three or four days ago that rates coming out of Reston would be high today. This gives you time to get your truck(s) there before the rates seesaw back down.

With Trucker Tools’ Market Report, you know several days in advance where rates will be high and where they’ll be low. The info in our report is accurate because it’s based on real-time, current data. Our market report uses real-time data from the Trucker Tools driver app, our free platform for carriers and our software platforms for brokers. With that data, we can determine where trucks will be needed in the future. We also look at inbound truck traffic vs. outbound truck traffic, load vs. truck ratios and other indexes to predict within a seven day cycle how rates are swinging up and down in a particular market.

It’s important to stay two or three days ahead of your competition and traditional market indexes. If you know that in the next two to three days that rates on loads coming out of a market are going to be hot, you can take loads that take your truck(s) into that market today. By the time your trucks get there, it will be hot because there aren’t enough trucks to move the loads that need to be moved.

Although everyone in trucking benefits from the information in our Market Report, small carriers have the most to gain. If you’re a smaller trucking company, your assets are limited and you likely only have one location from which you operate. Because of this, it’s extremely important that you know in advance where rates will be hot and where they’ll be cold. Let’s say you’re in Atlanta today and you find out that rates in California are going to be really high tomorrow. You can’t airlift your trucks and put them in California overnight. It will take your drivers three or four days to get there and by the time they get there, the market will have changed. Trucker Tools’ Market Report allows you to plan ahead and stay ahead of your competitors.