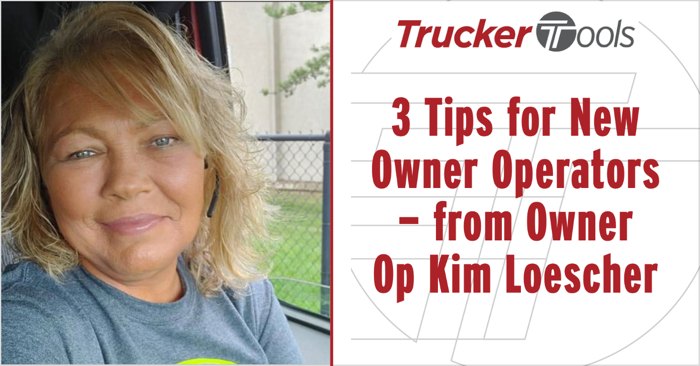 In our recent conversation with owner operator Kim Loescher, Kim shared what it’s been like to make the switch from company driver to owner operator. After working as a company driver for many years, Kim last year decided to start running as an owner op and today is operating under the authority of a friend and former colleague who owns a trucking business. These days, Kim owns her own truck and trailer and is hauling mostly frozen and refrigerated freight. She’s booking her own loads, self-dispatching and as Kim puts it, “I’m on my own time and I’m my own destiny going where I want to go.”

When we spoke with Kim, she shared what she’s learned in her first two years as an owner operator. Check out Kim’s three tips for new owner operators.

“Over the last year, I’ve built some relationships with a few different brokers,” Kim said. “I try and work as close to them as I can when it’s possible, but sometimes it’s not. Right now, I’m working with a broker that works with an apple company. The broker actually used to drive for the company. I’ve been working really close with her directly. When I do need to find a load, I use the Trucker Tools app and load boards.”

Kim shared that she loves being an owner operator because of the freedom she has. Kim can go home when she needs to and as long as her loads are on time and she’s making the brokers she works with happy, she doesn’t hear from them. Kim also said that Trucker Tools is her number one app and that many brokers use it for load tracking, which has worked out well for her.

“You have to pick your battles and you have to know what your bottom line is for freight,” Kim shared. “Cheap freight to me might not be cheap freight to the other driver. You’ve got to know what your overall profit is. Let’s say I’m taking a really good, high paying load out to Florida. You have to ask yourself, ‘Is that load going to pay me enough to make up for that loss that I’m going get when I’m coming out of Florida?’ I say that because I know freight coming out of Florida doesn’t pay the greatest and sometimes you may have to deadhead to get a good load. So is that good load going to compensate you enough so that you’re not going to have a loss?”

Kim said that knowing what you need for a per mile rate can help you make sure you don’t lose money on a load’s backhaul, which is especially important when diesel prices are high, as they are now.

3. Be Aware of Double, Triple Brokering and/or Freight Fraud

“I happened to come across a load on a load board recently that was paying very well going to Florida and when I received my rate confirmation, I thought that it looked like it might have been a double or tripled brokered,” Kim said. “When a load is double or triple brokered, the rate is cut down more and more each time it goes through another hand. My friend whose authority I run under thought it was a doubled or tripled brokered load as well. When we researched the company that was brokering the load, their credit score was really good but it turned out that they were using the name of a company that had been closed. Long story short, I probably wouldn’t have even gotten paid for that load if I’d taken it. We ended up getting in touch with the original broker and communicating with her directly.”

Kim advises owner operators to check the broker’s credit score and rating/reviews before agreeing to move a load in order to avoid freight fraud and scams. What tipped her off that the load in the above case was suspicious was that the rate confirmation sheet didn’t have much information on it. During the rate negotiation, the fraudulent broker was willing to give Kim whatever rate she wanted, which also was a red flag for her.

For more of our conversation with Kim, be sure to read “Breast Cancer Awareness Month: Survivor/Owner Op Kim Loescher Talks Early Detection and the Importance of Screenings.”