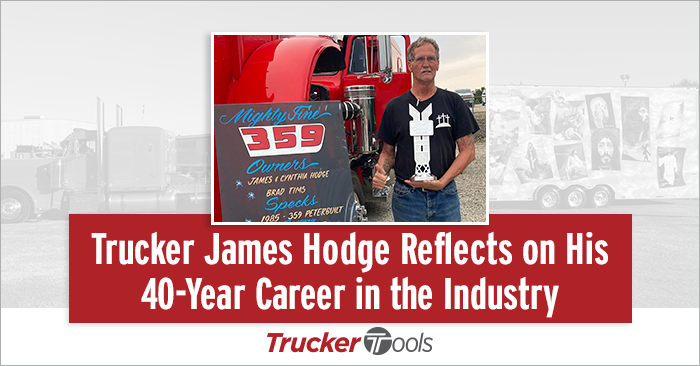 If you’re a regular reader of Trucker Tools’ blog, then you know that we love talking to truckers and carriers from all over the country! We recently had the good fortune to speak with James Hodge, a trucker who has been working in trucking for the last 40 years. As a veteran of the industry, James has done a little bit of everything in his career, from company driver and tanker driver to owner operator and driving local. Today James and his wife live in Rock Springs, Ga., and James drives trucks and other equipment for a paving company out of Chattanooga, Tenn. James and his wife also own a big rig/tiny home that they use for their ministry, appearing at local and national trucker events such as Ten Four D.C. and the Mid-American Trucking Show.

Read on to learn more about James, his long career in trucking and how he thinks the industry has changed over the last 40 years.

“I’ve pulled asphalt, emulsion, tankers, doubles, flatbed, reefers, dry van — I’ve done it all,” James said. “Then I was in the wrecker service and I’ve done heavy haul wrecker, but that got so dangerous so I decided to move on from that. It’s very dangerous being out on the side of interstate. I made good money, but it was really dangerous, especially now with people on their cell phones. It’s just amazing what you see out there. I liked over the road the most because I met a lot of good people and made a lot of good friends. You’d jump in the truck and dread leaving home, throw your suitcase in there, but when you get about a hundred miles behind you, you don’t look back. It’s just hard to get going, but once you get going, it’s an adventure. It’s an adventure every trip.”

Why James Went from OTR to Local

“Back when I was doing over the road driving, I was going out to the West Coast and was bringing produce back East,” James said. “My daughter at the time was seven years old and I’d call home and she’d get on the phone and she’d be crying, ‘Daddy, when you going to be home?’ I’d tell her that I’d be home in two or three days and she wanted me to come immediately. Boy, that was hard. At the time, I owned my own truck, but after a couple of years of that, I decided to sell my truck and get a local job so I could be home. When I was growing up, my daddy was a trucker and so I kind of related to what she was going through and what we went through as kids.”

How Trucking Has Changed

“It’s getting hard to find a good meal out there,” James told us when he asked how trucking has changed over the years. “All there is is fast food and all the truck stops are getting rid of their sit-down buffets. It used to be that we would gather around the table at the truck stop, five or six of us together at a table. We’d stop, eat, drink coffee, chit chat, and get back in the truck and take off now. Now it feels like there’s no camaraderie out there. It’s like it’s a thing of the past. I’d love to see some camaraderie come back and have some fellowship and sistership come back because we’re all on the same road, we’re in the same boat together. It used to be every trucker used their courtesy lights to let you know what’s up ahead, what’s behind and what’s happening on the highway. Now, they don’t even talk to each other on the CB. It’s unbelievable. I believe they should teach camaraderie and courtesy in schools. I learned a lot on my own, outside of what my daddy taught me, but I’m willing to help any drivers out there. I’d be interested in mentoring any driver out there. We’ve all got to start somewhere and I’ve got nothing against anyone behind the wheel, but they’d learn more if they just had fellowship with each other.”

To learn more about James, visit his Facebook page at https://www.facebook.com/james.hodge.98031/. To learn how the Trucker Tools app can help you on the road, read Trucker Tools’ Free Mobile App: The Go-To Lifestyle App for New Drivers and Carriers. To download Trucker Tools’ free driver app, visit https://www.truckertools.com/carriers/.