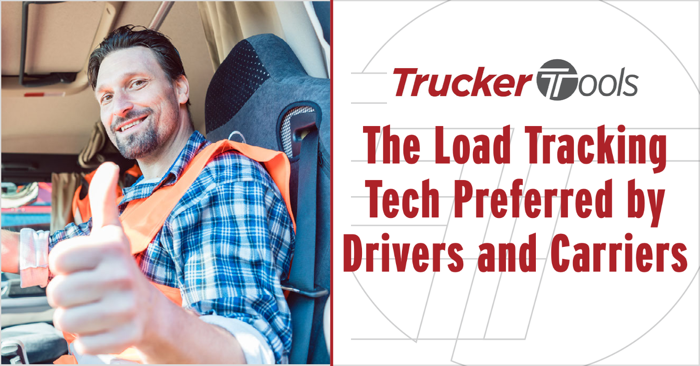 Getting drivers and carriers to use load tracking technology is often the greatest hurdle you face as a freight broker when it comes to providing freight visibility to shippers. Some drivers may not love tracking apps because they don’t provide value to drivers. Others may not trust that the technology will deliver the results as promised, so they’re reluctant to participate in digital load tracking. Still, other drivers are concerned about privacy and worry that visibility tech won’t stop tracking their locations once loads are delivered.

Here at Trucker Tools, we often hear from new customers that they’re interested in our real-time visibility software because we approach load tracking a bit differently than other technology companies. The driver component of our real-time visibility platform, the Trucker Tools driver app, can be used by drivers and carriers for load tracking with multiple brokers. We’ve also made the driver app a valuable, multi-functional digital toolbox that truly saves time, which is part of why our technology today is used by nearly 2 million drivers and 250,000 carriers.

The Trucker Tools App: Load Tracking and Then Some

Month after month, Trucker Tools’ free driver app is the most downloaded app in the trucking industry. What’s driving that popularity is the app’s usefulness. In addition to using the app to track loads for brokers, drivers can use the app to find and book loads, monitor rates, buy cargo insurance, trip-plan and save money on fuel. The app also helps them locate grocery stores, parking, rest areas, truck stops, weigh scales and more. The driver app includes 17+ different features and tools that save truckers time when they’re working. All of the features and tools in the driver app were developed based on feedback from real carriers and drivers — and we continue to add new features year after year.

“We partnered with Trucker Tools because that’s what the carriers told us they wanted to use,” Loadsmith CEO Brett Suma said in a recent interview. “They adopted to your tracking and it made their lives easier so they wanted to use you guys.”

We take the concerns of truckers seriously, which is why we’ve made the load tracking tool in the Trucker Tools app as transparent as possible for drivers. In order for tracking to begin, the driver must tap on Accept to initiate tracking. While the track is active, the driver can clearly see who is receiving the tracking data and for which load. Once the driver delivers the load and stops the track, the app stops transmitting the driver’s location, which is visible to the driver. Throughout the active track, the driver has the option to Pause or Cancel the track right from within the app.

The driver app’s versatility and the transparency it offers around load tracking are why brokers who implement our real-time visibility software and companion driver app often achieve higher tracking success than they have with other software platforms. The reason why is simple. Our technology addresses two of the factors that most often impede visibility compliance: the technology’s lack of value for the driver and concerns about privacy and transparency.

Trucker Tools’ real-time visibility software platform leverages the GPS tech in the driver’s smartphone and Trucker Tools’ free driver app to provide you with tracking updates every five minutes. GPS-based tracking data is accurate and reliable. In fact, GPS-enabled smartphones are typically accurate to within 16 feet. Due to the accuracy of GPS-based load tracking, most brokers who implement Trucker Tools’ real-time load tracking platform are able to reduce the number of check calls they make on each load by a significant margin.

Reducing check-calls is a win for you because it increases your efficiency. Fewer check calls is a win for drivers and carriers, too, because it means less time answering phone calls from your team and more time devoted to revenue-generating tasks, like booking loads. It’s also important to note that drivers and carriers can use the Trucker Tools driver app for load tracking with multiple brokers. The app integrates with the most popular TMSs used by brokers and the visibility software used by shippers. For drivers, this means less time downloading and learning to use one-and-done apps that just track a single load. Instead, they can use Trucker Tools’ driver app for tracking on every broker load.